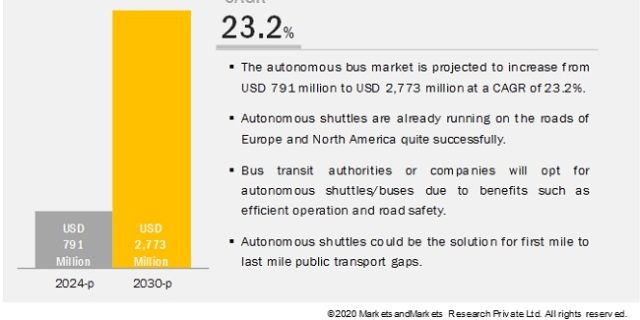 The growth of the semi-autonomous bus market can be attributed to the increasing road accidents, the need for efficient bus operations and demand for ADAS features in the buses. Government bodies across the world have started regulating the safety standards in buses to reduce fatalities in road crashes. The increasing need for passenger and pedestrian safety, efficient public transport, reduction in CO2 emission, and advanced features have compelled OEMs to design and develop semi-autonomous and autonomous public transport solutions. Countries such as the US, Canada, China, Japan, UK, and Germany have already permitted the testing and trials of such innovative bus technologies.

Factors such as shortage of drivers and increasing research and development in technologies such as V2X, 5G, connected buses, and ADAS will drive the market for autonomous buses in the forecast. The pandemic COVID-19 might affect the overall bus industry, as people will avoid using crowded public transport options for some time, resulting in the declined demand for buses.

The shuttle segment is expected to dominate the autonomous bus market, as these are already commercialized. Many companies such as Navya, EasyMile, and Local Motors have developed self-driving shuttles. Successful pilot programs of autonomous shuttles across the world are indicating that shuttles could be a practical solution to the gaps in traditional public transport. For instance, EasyMile, a French autonomous shuttle provider, claims to have deployed the most number of such shuttles globally than any other company. Also, Navya, 2getthere, Local Motors, and Sensible4 are some of the companies that have developed, tested, and are offering autonomous shuttles. On the other hand, commercialization of intercity or intracity buses would take time due to challenges such as highway operation, long-distance, city traffic, lack of infrastructure (intracity coaches might require separate lane in the city and highway conditions), and government regulations.

The global semi-autonomous bus market is dominated by major players such as Continental (Germany) Bosch (Germany), Aptiv (UK), AB Volvo (Sweden), and Denso (Japan). All the companies have strong distribution networks at a global level. In addition, these companies offer an extensive product range in this market. These companies have adopted strategies such as new product developments, collaborations, and contracts & agreements to sustain their market position. On the other hand, EasyMile (France), Navya (France), 2getthere (Netherlands), and Local Motors (US) are some of the companies that are focusing on developing autonomous buses/shuttles.