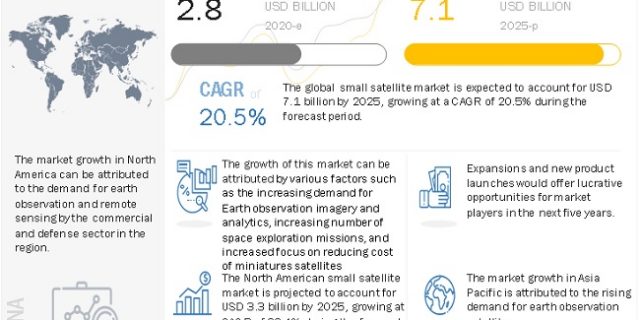 The report on the Small Satellite Market provides a detailed trend analysis from 2018 to 2025. It discusses industry and technology trends currently prevailing in the market, along with drivers, restraints, challenges, and opportunities that influence the growth of the market.

The global Small Satellite market size is projected to grow from USD 2.8 billion in 2020 to USD 7.1 billion by 2025, at a CAGR of 20.5% from 2020 to 2025. The market is driven by various factors, such as the growing demand for LEO-based services, demand for Earth observation imagery and analytics and increasing in number of space exploration missions are the major drivers of small satellite market.

Based on subsystem, payload is expected to have the second-largest market share during the forecasted period. Small Satellite contains specific technology for each mission. For example, weather monitoring small satellites have components that can measure wind speed and direction, changes in temperature, the amount of oxygen available, and the effect of UV rays. A different component is used for each application.  Payloads cater to applications like communication, Earth observation & remote sensing, mapping & navigation, surveillance & security, meteorology, scientific research & exploration, and space observation.

Based on NGEO Orbit, the   Traditional LEO and MEO Satellite is estimated to be the largest and fastest-growing segment in the small satellite market. The growth of this segment can be attributed to increased demand for LEO-based services. These are low mass and small dimension satellites deployed for key applications, including remote sensing, Earth observation, and communication. These satellites are typically positioned at a distance of 800–12,000 km from the surface of Earth. LEO and MEO satellites can transmit data at a typical rate of 1.6 Gbps, although some advanced versions can achieve even higher data transmission rates.

Based on frequency, the Ku-band segment of the small satellite market is projected to grow at the highest CAGR during the forecast period. The growth of this segment can be attributed due to the increased need for wider range of data communication.  This band is primarily used for mapping. It has a short range and a high-resolution imaging capability. The Ku band is mainly used for satellite communications, especially downlink, used by direct-transmission satellites for satellite television and specific applications, such as the NASA’s Tracking Data Relay Satellite, used for both the space shuttle and communications from the International Space Station (ISS).

Based on the region, the North America region of the Small satellite market is projected to grow at the highest market share during the forecast period. North America is a leading region for the adoption of small satellites and provides great opportunities for the growth of the overall market. The region has always been an early adopter of new technologies or software. The demand for small satellites in North America is being driven by the booming digitalization across industries, along with the surging demand for Earth observation satellites, which offer extremely high-resolution Earth images and videos, as close as 1 meter or less, of the Earth’s surface.