Skip to content Skip to blog sidebar
Home » Energy and Power » Smart Ports Market to Grow at CAGR 23.9% by 2026 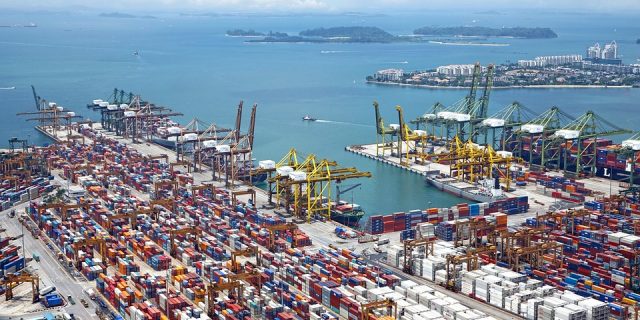 The smart port market in Asia Pacific is projected to be the fastest-growing market during the forecast period. The market in this region has been studied for China, Japan, India, and the Rest of Asia Pacific (South Korea, Australia, Thailand, Vietnam, and Malaysia). The smart port market in Asia Pacific is dominated by China. The growing trade volumes and need to reduce the carbon emission from maritime activities are to attract investment in smart port infrastructure development projects in this region. In terms of port development, the ports in the region have grown in tandem with the economic development of most countries and cities, reflecting the region’s recent rapid economic growth. Asia Pacific is one of the fastest-growing economies in the world due to numerous factors such as international divisional manufacturing, global supply chains, low production cost and each country’s export-led development policies. This has translated into the increasing volume of cargo moving from this region. As major cargo transportation happens through sea routes, owing to which the number of ports in Asia is increasing every year, and the existing ports are witnessing expansion. Automation, informatization, streamlined work processes, implementation of new equipment, and staff training are all part of the plan to increase the efficiency of existing port facilities in the region.

The smart port market, by technology, is segmented into process automation, IoT, artificial intelligence (AI), and blockchain. The process automation segment is expected to have the largest share as it is a basic technological need to increase efficiency and convert port operations into smart ones. Process automation includes the use of robotics & computers for automating port operations. It also includes the integration of sensors, networks, standards, augmented intelligence, and augmented behavior into the process. This helps in reducing the labor cost and improving the overall process efficiency in port operations. Currently, many ports have autonomous vehicles that carry containers without human intervention.

Based on element smart port market has been segmented into terminal automation & cargo handling, port community system (PCS), traffic management system (TMS), smart port infrastructure, and smart safety & security. The smart port infrastructure segment is projected to lead the smart ports market from 2021 to 2026. It is the most intensive aspect of developing any port into a smart port. With the rise in global trade, it has been observed that the size of vessel and cargo volumes have increased, which has impacted the seaports in terms of managing the operations. Ports are therefore increasing the adoption of smart solutions that will help optimize operations, promote efficiency, and reduce logistics costs without requiring major investment in new infrastructure and equipment. Hence, increasing trade via ports around the world has created a need for investments in the modernization of port infrastructure.

Based on port type, the smart ports market has been segmented into seaport and inland ports. The seaport segment is expected to dominate the smart ports market during the forecast period. A seaport is an important interface in the supply chain between sea and land transportation and a component of freight distribution as it acts as the entry point for various products and passengers to a country, as well as the exit door to all the exports to the international markets. Smart technologies are deployed at seaports to support the necessary seaport infrastructure. For instance, smart sensors help port authorities and terminal operators track, operate, and maintain the physical infrastructure and facilities. Smart sensors also help to monitor the condition of vital infrastructure, assisting operators in scheduling predictive maintenance and reducing the need for annual inspections. The data collected from sensors is used by port operators for cargo handling, as well as to ensure fewer emissions.