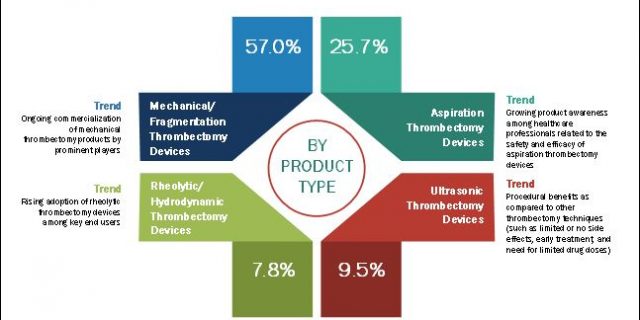 This large Thrombectomy Market share is mainly attributed to factors such as increasing prevalence of cardiovascular diseases across major markets, higher prevalence of thrombotic diseases among geriatric individuals, procedural benefits offered by mechanical thrombectomy in cardiac surgeries and growing preference of surgeons for image-guided and minimally invasive cardiac surgeries.

According to research report thrombectomy devices market is estimated to reach USD 1.45 billion by 2022; growing at a CAGR of 6.7% during the forecast period.

The key players focused on various strategies such as product launches and enhancements; agreements and collaborations; strategic acquisitions; and expansions to increase their shares in the global thrombectomy devices market. Product launches & enhancements is the strategy adopted by major industry players to achieve the desired market growth during 2013-2017.

Medtronic plc is one of the prominent players in the market, in 2016. The company has a strong foothold in the market with a broad range of thrombectomy products. The company has a strong geographic presence across Asia-Pacific, Eastern Europe, Latin America, the Middle East & Africa, Central Asia, Western Europe, South Asia, and North America. To strengthen its current position and to gain a larger share in the market, the company aggressively focuses on growth strategies such as acquisitions and market expansions. During 2012–2016, the company established its training and research facility—Covidien Center of Innovation Brazil—in Brazil and its R&D, training, and education center—Covidien Center of Innovation Korea—in South Korea to enhance its R&D capabilities and expand its product portfolio and market presence in the thrombectomy market. The company also focuses on product commercialization as its business strategy. It commercialized thrombectomy devices such as the Solitaire stent retriever device in 2016 and Solitaire revascularization device in 2012.

Stryker Corporation held the leading position in the thrombectomy devices market in 2016. The company offers its thrombectomy devices through the Neurotechnology & Spine segment. The company has a strong presence in North America, Europe, the Middle East, Africa, Asia-Pacific and other countries. The company has more than 30 manufacturing facilities in countries such as the U.S., China, Turkey, Germany, Ireland, Switzerland, and France. It primarily focuses on growth strategies such as product development & commercialization, acquisitions, and market expansions. The market has witnessed several product launches & commercialization, expansions, and acquisitions by Stryker Corporation (U.S.) in the last three years. For instance, in 2016, the company commercialized thrombectomy devices such as Trevo Provue retriever and Trevo XP ProVue retriever, the establishment of its European headquarters in Amsterdam (Netherlands), in 2015, and the acquisition of Trauson Holdings Company Limited (China) in 2013. These developments strengthened its R&D capabilities and expanded its product portfolio in the thrombectomy market.

The thrombectomy devices market was dominated by North America; mainly due to significant adoption of technologically advanced thrombectomy products, growing number of clinical trials, and significant medical reimbursement available in the U.S. for thrombectomy procedures. However, Asia-Pacific market is expected to grow at the highest CAGR during 2017-2022. This is primarily due to the presence of large target patient population, increasing healthcare expenditure, increase in localized manufacturing & strengthening of distribution networks, and rising awareness among surgeons related to the benefits offered by thrombectomy devices.