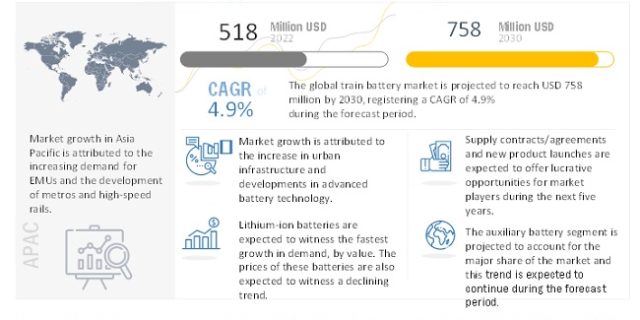 The growth is influenced by factors such as growth in the rail network, strengthening emission norms and growing operating cost of the urban rail network is considered to be the largest drivers of the train battery market. The rapid urbanization and growing need for sustainable transport are expected to lead to the demand for energy storage systems and hence are expected to propel the demand for train batteries during the forecast period.

The Li-ion battery segment is expected to register the highest growth rate of 6.8% from 2022 to 2030

The Asia Pacific is estimated to be the largest market

The train battery market in the Asia-Pacific has witnessed significant year-on-year growth. Asia-Pacific is the leading manufacturer of rolling stock and hosts manufacturing plants of leading rolling stock manufacturers such as Bombardier Transportation (India), Siemens Mobility (China), Alstom Transport (Singapore), the Stadler Rail AG(Taiwan) and, CRRC Corporation (China). Additionally, the expansion of high-speed rail networks in China, India, Japan, and South Korea is expected to drive the demand for train batteries in the region. Furthermore, developments such as diesel engine retrofitting and, electrification of the rail network will increase demand for train batteries for auxiliary functions.