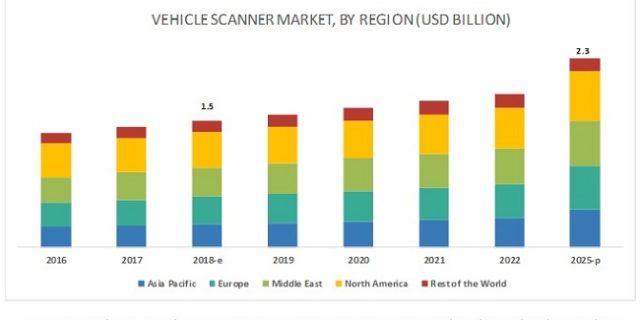 The growth of the automotive vehicle scanner market is influenced by factors such as rising safety and security concerns, huge investments in infrastructure, and securing border premises.

The government/critical infrastructure protection segment is expected to be the largest vehicle scanner market. The growth is due to factors such as continuous rise in military expenditure and securing borders by installing safety and security products. Cross- border security is one of the highly sensitive security aspects considered for the safety of any country. Illegal entry of migrants by crossing the borders in shipping containers, boxcars, and trucks can be minimized by installing vehicle scanners. Thus, the demand for vehicle scanners is high for the government/critical infrastructure protection segment.

The Asia Pacific region is estimated to be the fastest growing market. The region comprises some of the fastest developing economies of the world such as China and India. The Asia Pacific region is home to key suppliers of vehicle scanners such as Vehant (India), Safeways Systems (China), Dahua Technology (China), and ParkNSecure (India). The countries in this region are investing huge amount to develop and maintain the infrastructure. With infrastructure, a country is able to create macroeconomic conditions in order to reduce poverty. A well-developed infrastructure helps in developing the economy and enhancing the standard of living. The development in infrastructure leads to the rise of safety and security concerns such as terrorism, illegal activities, bombs, and threats. Thus, to combat rising security concerns, the demand for vehicle scanners in the region has increased.

The global vehicle scanner market is dominated by major players such as Gatekeeper Security (US), SecuScan (Germany), UVIScan (Netherlands), Leidos (US), and IRD (Canada).