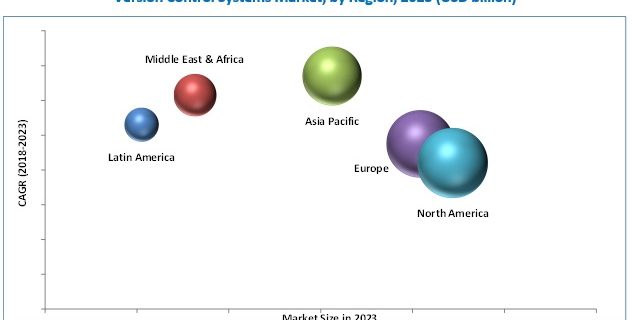 The Version Control Systems Market projected to grow from USD 438.8 million in 2018 to USD 716.1 million by 2023, at a CAGR of 10.3% from 2018 to 2023. Major factors driving the demand for version control systems across the globe include continuously increasing adoption of smartphones and tablets and growing need to reduce complexities during software development process.

Based on type, the DVCS segment of the version control systems market is estimated to grow at a higher CAGR than the CVCS segment during the forecast period. Customers are gradually shifting from CVCS to DVCS owing to the various advantages offered by DVCS. The distributed version control systems, such as Git, are considerably faster and easier to work with when it comes to creating and merging branches and tags. Additionally, distributed version control systems do not rely on a central server to store all the versions of a project’s files. Thus, users can collaboratively work even when there is no internet connectivity for a while.

Based on vertical, the IT & telecom segment is projected to grow at the highest CAGR during the forecast period. Growth in the development of mobile applications, the recurring release of updated software versions, and the need to identify and resolve software bugs have led to an increased demand for version control systems in IT & telecom organizations.

The Asia Pacific version control systems market is projected to grow at the highest CAGR during the forecast period. This growth is expected to be driven by factors such as increased spending on improving infrastructures, the emergence of advanced & secured cloud-based solutions, tax reformation policies, smart city initiatives, and digitalization in the region. The major countries expected to witness high growth rates in this region include China, Japan, Singapore, and Australia & New Zealand (ANZ). Organizations adopting DevOps are more likely to have a positive impact on the growth of the version control systems market in this region.

Unified Communication and Collaboration Market Witness the Growth of $127.5 billion by 2026