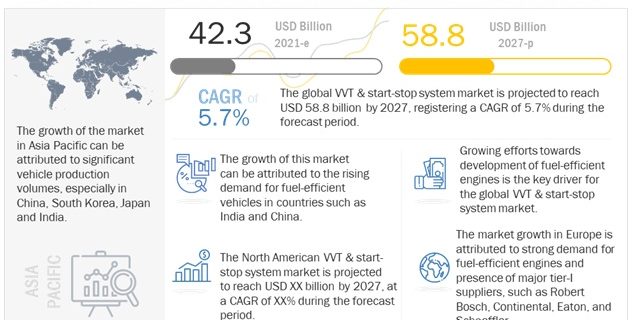 Some of the major factors responsible for the growth of the VVT & start-stop system market are government regulations for reducing emissions levels and increasing hybridization of vehicles.

The adoption of Cam-phasing plus changing system is estimated to exhibit higher growth rate in Asia Pacific and North America during the forecast period, owing to the increase in performance-focused fuel efficient vehicles and stringent emissions regulations. The market for VVT systems is estimated to further increase with the rising production levels of automobiles incorporated with these advanced technologies. Europe is projected to witness moderate growth for VVT systems due to the saturation of VVT technology in countries such as Germany, France, and Spain. The high rate of technological adoption in regions like China, India, and South Korea is also a driving factor for the growth of these systems in the Asia Pacific region.

The ISG system combines the conventional automotive starter and alternator into a single unit, which is attached directly to the crankshaft of the engine. The starter used is a low-speed DC motor, and the alternator used is a variable speed three-phase AC motor. One of the advantages of ISG is that it replaces both the conventional starter and alternator with a single electric device. ISG technology supports the start-stop and the recuperative braking capability in high voltage. This makes ISG more efficient than a conventional generator, resulting in up to 20% reduced overall fuel consumption. Hence, its growth is projected to be the fastest in the global market, compared to other Start-stop technologies.