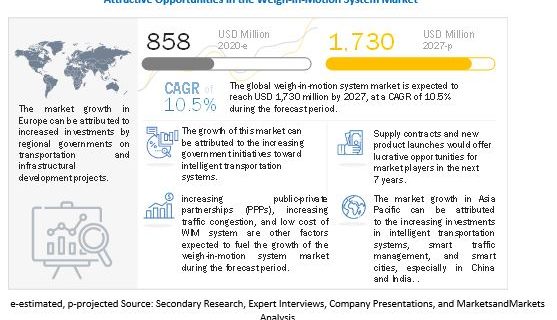 The traffic data collection system provides real-time monitoring of specific situations and road areas, such as toll highways, bridges, and underpasses, with the help of dedicated video devices. The system extracts useful information about road mobility and traffic, helps enhance road safety, and gives information to users. Thus, the traffic data collection segment is expected to be the fastest-growing segment during the forecast period.

In the in-road weigh-in-motion system, the sensors are installed beneath the road surface. These sensors capture and record the passing vehicle’s information such as weight, length, and class in the data storage system. In-road weigh-in-motion systems help protect roads from overloaded vehicles. Mettler Toledo, International Road Dynamics, and Kistler are some of the major manufacturers of in-road WIM systems.

The in-road segment is expected to lead the market during the forecast period as it is the most popular and traditional weigh-in-motion system. In-road WIM systems are widely used in industries such as highway toll, logistics, oil & refinery, and mining.

Asia Pacific is estimated to be the fastest growing market

The increasing number of megacities and the population growth in developed and developing countries has increased the use of various traffic sensors and weigh-in-motion systems in the Asia Pacific region. The weigh-in-motion system market in Asia Pacific is growing rapidly because of the demand in countries such as China, Japan, and India. Some of the key players in Asia Pacific region are Essae Digitronics, Ashbee Systems, and Jiangxi Zhongjiali High-Tech, among others.