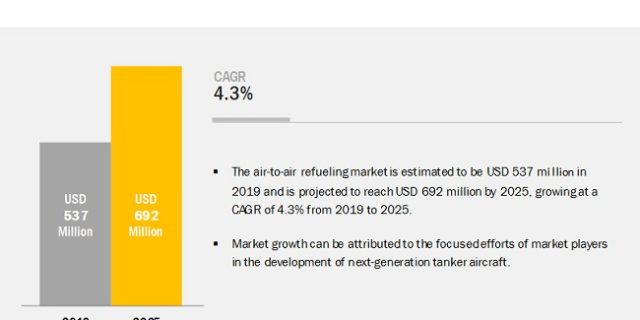 The report “Air-to-Air Refueling Market by System (Probe & Drogue, Boom Refueling, Autonomous), Component (Pumps, Valves, Nozzles, Hoses, Boom, Probes, Fuel Tanks, Pods), Aircraft Type (Fixed and Rotary), Type (Manned, Unmanned), Region – Global Forecast to 2025″, is projected to grow from USD 537 million in 2019 to USD 692 million by 2025, at a CAGR of 4.3% during the forecast period. Increase in the procurement of combat aircraft is expected to be the major factor driving the market.

By aircraft type, the air-to-air refueling market has been segmented into fixed wing and rotary wing. Among these, the fixed wing segment is projected to grow at the highest CAGR during the forecast period. A fixed wing aircraft is capable of flight using wings that are fixed to the fuselage and generate the necessary lift by the forward motion of the aircraft. The fixed wing aircraft segment has been further segmented into fighter aircraft, tanker aircraft, military transport, and Unmanned Aerial Vehicles (UAVs).

By type, the air-to-air refueling market has been segmented into manned and unmanned. Among these, the manned segment is estimated to account for the largest market share during the forecast period. Manned aircraft refers to an aircraft operated by one or more persons. Saab Gripen fighter, Bell-Boeing V-22 Osprey, and the HAL Dhruv helicopter are examples of manned aircraft. The rising adoption of air-to-air refueling through manned systems by the military forces across the globe is projected to fuel the growth of this segment.

North America is estimated to account for the largest share of the air-to-air refueling market in 2019. The market in North America is projected to capture the highest revenue share during the forecast period. Increase in aircraft deliveries with multiple variants of refueling tankers, such as KC-130, KC-135, and C-160 NG, among others in the US is expected to contribute to revenue generation.

Some of the major players in the air-to-air refueling market include Cobham (UK), Eaton Corporation (US), Airbus (Netherlands), Parker Hannifin Corporation (US), GE Aviation (US), Safran (France), Marshall Aerospace and Defence Group (UK), and Draken International (US) among others.