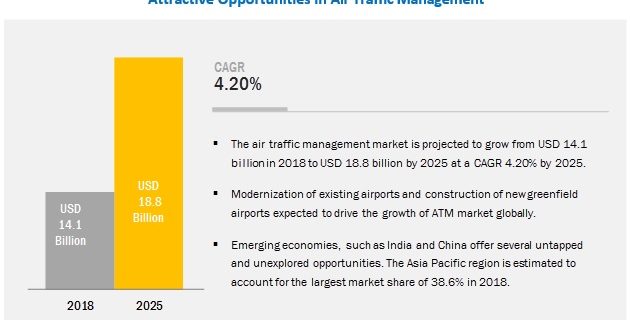 Global Air Traffic Management (ATM) Market is projected to grow from an estimated USD 14.1 billion in 2018 to 18.8 billion by 2025, at a CAGR of 4.20% during the forecast period. Increasing global airport investments and upgradation of ATM systems are expected to drive the growth of the market.

Based on component, the market has been segmented into Hardware, and Software. The software segment is projected to grow at the highest CAGR during the forecast period. The growth of this segment can be attributed to the increasing automation in air traffic management which will require advanced software algorithms.

Based on investment type, the market has been segmented into Brownfield and Greenfield. The brownfield segment is projected to grow at a higher CAGR during the forecast period. Growth of this segment can be attributed to the higher investments in modernizing, renovating, and upgrading existing airports in both, emerging and developed economies.

The air traffic management market has been studied for North America, Europe, Asia Pacific, Middle East, and Rest of the World (includes Africa and Latin America). Asia Pacific is estimated to account for largest share of the global market in 2018. Air traffic in the Asia Pacific has been growing at a high rate, which has led to the demand for more airports and modernization of existing ones. China is the largest market in this region, followed by India. Rise in air passenger traffic has led to the introduction of new airlines, which has led to an increase in the number of aircraft deliveries, which is simultaneously expected to boost the market in this region. Asia Pacific is expected to continue to lead the market during the forecast period.