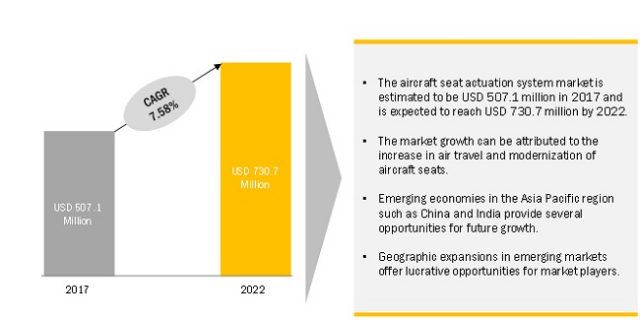 According to the new market research report Aircraft Seat Actuation System Market is projected to reach USD 730.7 million by 2022, at a CAGR of 7.58% from 2017 to 2022. The base year considered for the study is 2016, and the forecast period is from 2017 to 2022. Increase in aircraft orders, rising demand for lightweight seats, and growth in premium air travel are projected to drive the aircraft seat actuation system market in the coming years. However, backlog of aircraft deliveries is major challenge which can affect the growth of aircraft seat actuation system market.

Based on seat class, the business class segment is projected to grow at the highest CAGR during the forecast period. Business class and first class seats have various features, including adjustable headrests, reclining mechanism, electronics, control for in-flight entertainment systems, and massage and adjustable lumbar support. The increasing air passenger traffic and demand for premium class seating in aircraft are driving the growth of the business class segment of the aircraft seat actuation system market.

The Middle East is expected to be the fastest-growing market during the forecast period. The growth is largely due to an increase in fleet size of the countries in the region. The airlines operating in this region are focused on enhancing passenger experience and the aftermarket sales are expected to be high. The growing air passenger traffic coupled with the increase in demand for premium seating are some of the major drivers expected to propel the growth of the aircraft seat actuation system market in the Middle East during the forecast period.