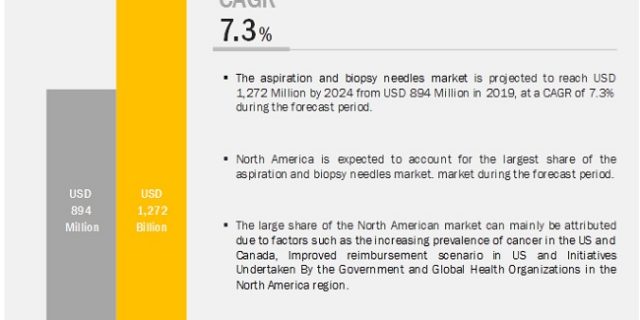 According to the new market research “Aspiration and Biopsy Needles Market by Product (Fine-needle Aspiration, Biopsy (Core & Vacuum Assisted)), Site, Procedure (Image-guided (Ultrasound, MRI, Stereotactic), Nonimage-guided), End user (Hospital, Academia) – Global Forecast to 2024″, analyzes and studies the major market drivers, restraints/challenges, and opportunities. The aspiration and biopsy needle market is estimated to grow at a CAGR of 7.3% to reach USD 1,272 Million by 2024 from USD 894 Million in 2019.

The global Aspiration and Biopsy Needles market is segmented based on product, site, procedure end user and regions.

On the basis of site, the aspiration and biopsy needles market is segmented into breast, lung, colorectal, prostate, kidney, and bone & bone marrow. The lung segment is expected to register the highest growth rate due to the increasing prevalence of lung cancer.

Based on end user, the aspiration and biopsy needles market is segmented into hospitals, research laboratories & academic institutes, and diagnostic & imaging centers. In 2019, the hospitals segment accounted for the largest share of the aspiration and biopsy needles market, and it is also projected to grow at the highest rate owing to the high preference for hospital-based biopsy procedures and the rising number of hospitals in emerging countries.