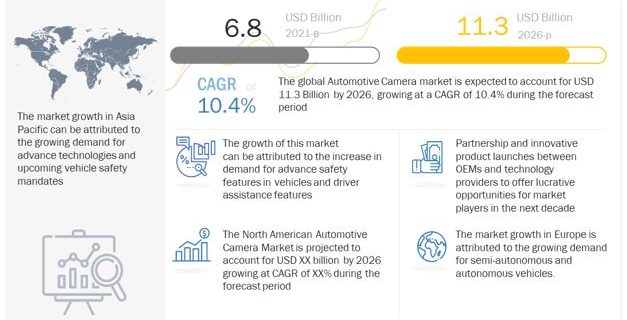 The Automotive Camera Market is projected to grow at a CAGR of 10.4% during the forecast period. It is estimated to be USD 6.8 billion in 2021 and is projected to reach USD 11.3 billion by 2026. The market growth is primarily driven by factors such as regulatory changes and increasing demand for active safety system. The emergence of newer safety technologies in the automotive industry and the growing demand for electric cars have driven the automotive camera market.

Added safety and convenience for the driver has been a major objective of developing camera systems. Moreover, the increasing government mandates related to active safety system are driving the automotive camera market. For instance, in May 2018, the government of Canada and the US mandated that all vehicles under 10,000 pounds must be equipped with a backup camera. Also, the US government has a voluntary agreement with many manufacturers to fit autonomous emergency braking (AEB) by 2022.

The market in Europe has been studied for the UK, Germany, France, Spain, Russia, Turkey, and the Rest of Europe. Automotive cameras are majorly used in the automotive industry for ADAS or park assist purposes. The UK, Germany, and France are home to several automobile manufacturers. The use of advanced, automated technologies in vehicle manufacturing would drive the demand for automotive cameras in this region. The automotive camera market in Europe is expected to grow due to the rise in awareness regarding enhanced efficiency in vehicles for traveling and logistics and the establishment of various safety & security standards regarding ADAS deployment. Germany is the largest market for automotive cameras in Europe. The growth of the market can be attributed to technological advancements in driver assistance features such as traffic jam assist and blind-spot detection with rear cross traffic.

The North American region has been studied for the US, Canada, and Mexico. The automotive camera market in the region is projected to witness significant growth during the forecast period due to the higher penetration of ADAS and park assist features in most vehicles. North America is home to Ford Motors, General Motors, and Fiat Chrysler Automobiles. The North American Free Trade Agreement (NAFTA) has fostered the growth of the automotive industry in the region. The US, traditionally a global technological leader, is the largest automotive market in North America. Here, a large customer base and high disposable incomes fuel the demand for vehicles and result in increased manufacturing activities by local automotive OEMs. The sales statistics of North America indicate a promising growth potential, particularly for pickup trucks and SUVs, which dominate the market.