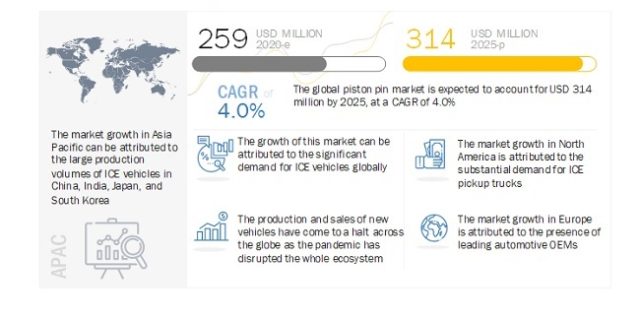 The global Automotive Piston Pin Market size is projected to grow from USD 259 million in 2020 to reach USD 314 million by 2025, at a CAGR of 4.0%. The growth of the piston pin market can be attributed to the substantial production and sales volumes of ICE vehicles across the world. Also, significant demand for high-performance vehicles that require large engines and the growing trend of CNG, LNG, hybrid, and plug-in hybrid vehicles to drive the market for piston pins during the forecast.

The North American piston pin market is expected to be the fastest. The North American automotive industry is the only industry where LCVs form a significant market share. LCVs, due to their versatility and practicality, has been the vehicle of choice for the average American buyer over the years. The growth of small-scale businesses has also played a vital role in the rising demand for these vehicles in the region. The US is the largest market in the region (accounts for over 68% of the overall market). It is followed by Mexico and Canada. The sales statistics indicate a promising growth potential, particularly for pickup trucks and SUVs, which dominate the market. With the growth in the production of LCVs, the market for piston pins is also expected to grow in North America in the coming years.

The gasoline segment is projected to have the largest share of the piston pin market during the forecast. The growth of the gasoline segment can be attributed to the growing preference over diesel engines due to the strict emission standards across the world. Also, the life of gasoline engines is almost double than that of diesel engines. Gasoline engines require less maintenance. On the other hand, diesel engines require servicing/maintenance of the components after ~5,000–6,000 km. In the aftermarket, gasoline vehicles require minimal replacement of components. However, in the case of diesel engines, components of the piston system get replaced more often. All these factors have contributed to the demand for gasoline passenger vehicles.