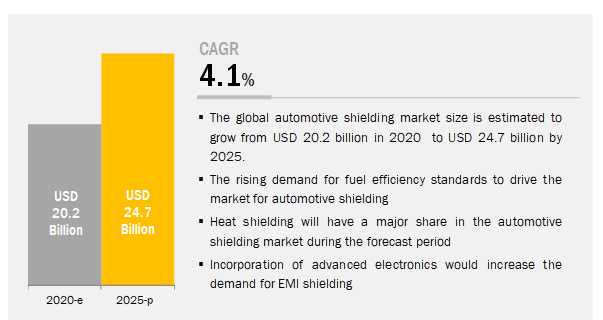 The global Automotive Shielding Market size is projected to reach USD 24.7 billion by 2025 from USD 20.2 billion in 2020, at a CAGR of 4.1%. The growth of the market is driven by increased adoption of electronics-based safety systems and the growing demand for fuel-efficient vehicles.

Engine control module, which is also known as Electronic Control Unit (ECU), is a term used for any embedded system that controls one or more electrical systems/subsystems in a vehicle. Modern-day vehicles can have more than 50 ECUs. The ECU gathers data from sensors installed in a vehicle. It uses this data to enhance the working of various operations such as the timing of fuel injection, spark timing, stability control, and in-vehicle telematics.

The EMI shielding market for ECM is expected to increase due to the increased use of ECMs in a vehicle. The number of ECMs in a vehicle has increased due to factors such as rising demand for advanced electrical & electronic components, emission regulations, and safety & security concerns. In addition, the growing demand for high performance engines in the luxury vehicle segment is expected to increase the need for EMI shielding for ECM. ECM is responsible for air-fuel mixture, ignition timing, and valve timing. High performance engines require advanced ECM to deliver the desired performance.

Most of the vehicles are now equipped with exhaust system heat shields to reduce the amount of heat radiated by the exhaust system and protect the other body parts. Increasing stringency of fuel economy standards in the EU, Japan, and China has led OEMs to focus on vehicle lightweighting and aerodynamics. In December 2018, the European Commission presented a bill to set fuel economy standards. It aimed to reduce the average CO2 emission of passenger cars and vans by 15% in 2025 and 37.5% in 2030. For light commercial vehicles, the authority targeted to cut down emissions by 15% in 2025 and 31% in 2030.

Asia Pacific is expected to be the largest market by 2025

China, India, and Japan account for the largest shares of the automotive shielding market in Asia Pacific. The growth of the market in Asia Pacific can be attributed to the high vehicle production and increased use of advanced electronics in Japan, South Korea, India, and China. The governments of these countries have recognized the growth potential of the automotive industry and have consequently taken different initiatives to encourage major OEMs to enter their domestic markets. This has led to an increase in vehicle production volumes over the years, which caters not only to domestic demand but also overseas demand.

Major players like Dana and Lydall are investing and increasing their footprint in the Asia Pacific market. For instance, in 2018, Dana inaugurated a plant that would manufacture thermal management products for conventional and new-energy vehicles in Yancheng, China. The rising penetration of such companies in Asia Pacific will drive the overall market. 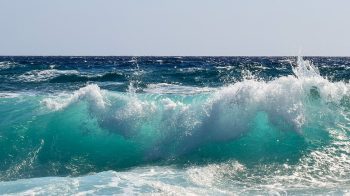