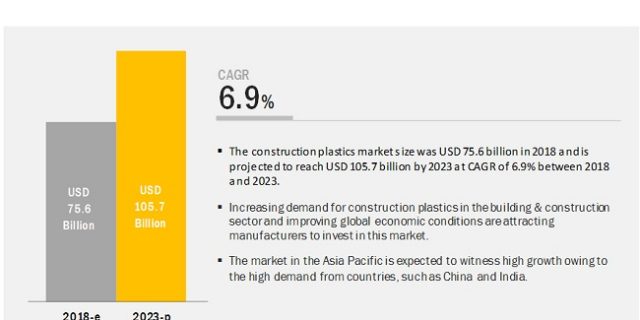 The global construction plastics market is estimated to be USD 75.6 billion in 2018 and is projected to reach USD 105.7 billion by 2023, at a CAGR of 6.9%. This growth is mainly attributed to the high demand for plastics from the building & construction industry.

Saudi Basic Industries Corporation (SABIC) (Saudi Arabia) is one of the leading players in the construction plastics market. The company has been focusing on organic & inorganic strategies to maintain its leading position. For example, In June 2014, SABIC and Cima NanoTech (Singapore) announced a joint venture for the production of transparent conductive polycarbonate film material. The new transparent conductive polycarbonate film material is technologically superior and is suitable for construction and other industrial applications. In October 2017, Sabic and SINOPEC entered into a 50-50 joint venture to a build a new facility through this 50-50 joint venture, and Tianjin Petrochemical Co. Ltd (TPC) awarded a new contract to SABIC & SINOPEC to build a new polycarbonate plant in Tianjin Province, China. The plant helps both the companies strengthen its growth in high-performance engineered thermoplastics in China.

BASF SE (Germany) is the other major player in the construction plastics market. The company adopted organic growth strategies to establish its foothold, globally. For example, in June 2018, BASF SE expanded its presence to Germany, Korea, and others. With this expansion, BASF SE was able to increase its global production capacity of insulation materials, which in turn, resulted in increased demand for gray insulation materials, globally. In October 2017, BASF SE launched a new product, Ultradur, which is composed of PVC and is expected to be used to replace steel in the windows application in the building & construction industry.