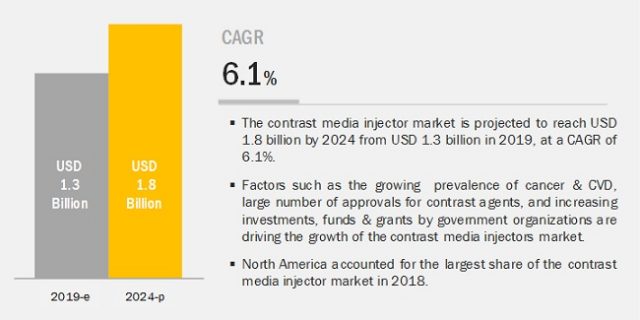 Factors such as the growing prevalence of cancer and CVD; a large number of approvals for contrast agents; and increasing investments, funds, and grants by government organizations are driving the growth of the Contrast Media Injectors. However, the high cost of contrast media injectors and consumables & accessories is restraining the growth of the market to a certain extent.

The consumables segment accounted for the largest share of the contrast media injection market, by type, in 2018.

The interventional cardiology segment to register the highest CAGR in the contrast media injector market during the forecast period.

Based on end-user, the Contrast Media Injectors Market is segmented into hospitals and diagnostic imaging centers. The hospital segment commanded the highest growth rate of the global Contrast Media Injectors Market in 2018. The high growth rate of this segment can be attributed to the rising number of diagnostic imaging procedures performed in hospitals and the growing inclination of hospitals towards the automation & digitization of radiology patient workflow. Additionally, increasing adoption of minimally invasive procedures (including diagnostic imaging systems) in hospitals to improve the quality of patient care, and rising adoption of advanced imaging modalities to improve workflow efficiency in hospitals are other key factors driving market growth.

Geographically, North America dominated the contrast media injector market in 2018, while Asia Pacific is expected to register the highest CAGR during the forecast period. The large share of North America is attributed to the increasing number of diagnostic imaging units & examinations, rising aging population & corresponding disease conditions in the US, significant focus & government investments in the medical imaging arena, and increasing research activities in Canada.