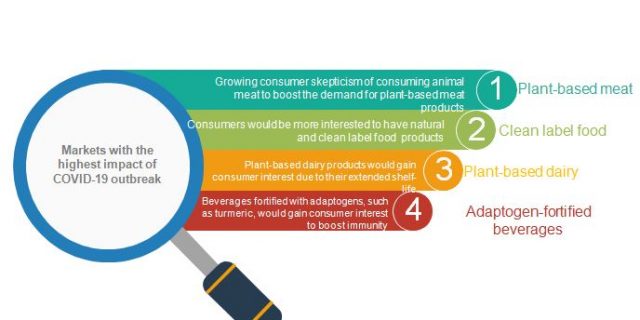 The plant-based food industry is one of the most positively impacted markets after the COVID-19 pandemic breakout. Since this deadly viral disease is said to have been potentially originated from animal sources, the animal meat industry, in particular, is expected to witness a notable decline in sales and demand. Due to this, the consumers are and would be looking for substitute products with similar nutritional values as well as taste. Plant-based meat is one of the main substitutes to traditional meat offering similar texture, feel, and nutritional qualities such as that of meat. In addition, plant-based products, in general, are more shelf-stable than their animal counterparts. For instance, plant-based milk offers an extended shelf life, along with other plant-based dairy products. In this current COVID-19 scenario, consumers have already started picking up shelf-stable products to avoid regular purchases.

Many companies have already started changing their strategies, witnessing sudden growth in demand. For instance, Fable, one of the most prominent players of plant-based meat products in Australia, has shifted its strategy to sell plant-based meat burgers through online channels. Earlier, Fable’s major distribution was through wholesale channels to restaurants and café.

The company has advanced its expansion plans to e-commerce, as a result of the current pandemic effect and growing demand for meat alternatives. Plant-based dairy is also witnessing a sudden surge in demand for plant-based milk in particular. People are stock-loading these products due to their extended shelf lives. Owing to this, the key players in the market such as Ripple Foods (US), Mamma Chia (US), and Elmhurst (US) have reported an exponential growth through retail channels in particular. Mamma Chia has reported witnessing around 75% growth week-on-week basis through physical retail stores and around 400%–500% increase through an e-commerce store.

Similarly, oat lattes and oat milk of Elmhurst have been the most in-demand products post COVID-19 outbreak. The company has witnessed an increase of around 300%–400% in sales through online channels. Their production has also increased, for which they are continuously making strategies to meet the growing Continuous investments in the plant-based foods space are simultaneously supporting the whole industry during this COVID-19 outbreak. Recently, Impossible Foods raised around USD 500 million to be used for expansion in the retail and foodservice space. Not only this, Kale United, a crowdfunding platform, raised EUR 350,000 to support the plant-based food industry on a single day. If this scenario continues, the market will boom further post this pandemic.

North America is one of the largest consumers of plant-based food, followed by Europe. This is because of the presence of a large number of players in the country. New product launches, expansions, and investments are largely taking place in these regions for plant-based food. Even consumers are aware of the benefits of consuming such diets. Also, high disposable incomes in these regions support further market growth.

The trends such as “clean label” and “free-from” foods would further drive the market for plant-based food. Enriched with or fortified plant-based foods would be in high demand due to their health benefits. Beverages fortified with plant-based adaptogens would surely experience a surge in demand. This is because consumers would start focusing on building immunity and eating right.

Apart from this, the adjacent ingredient market would also witness a sudden growth in sales. For instance, soy, wheat, pea, and oats would witness a growing demand from the plant-based food industry. Many new players are expected to enter the market post this pandemic, as a result of the increasing demand for plant-based food. GMO-free ingredients would be more in demand as people would turn out to be more vigilant of what they are eating. In continuation, pea protein is one of the trending protein ingredients for consumers who are gluten and soy allergic.

As a result of all of the above factors, formulating short-term, mid-term, and long-term strategies to meet the changing requirements in the market is extremely important. Companies should focus on gaining investments, innovating new products, having backups for raw material suppliers, and offering clean label and free-from products. This way, the players in the market could potentially increase their shares and sustain the competition.