Hi-tech innovations have initiated a revolution in military affairs. Due to technological advancements and the changing nature of warfare, there is a need for new-generation weapons, which are referred to as directed energy weapons (DEW). The introduction of directed energy weapons has changed the warfare scenario to a great extent. All branches of military along with the defense industry are striving to make the most of these DEWs. This industry has seen huge investments in development, operational testing, and evaluations.

Precision is the most important aspect of weapon development. The decision-maker can easily tackle battle situations with high-precision weapons. DEW perform precisely well in all circumstances, thereby reducing the number of casualties. Given the necessity of precision weaponry, this industry is predicted to create a deep impact over the next five years.

Directed energy weapons are modernized systems suited for the changing nature of warfare, as there is a need for replacement of conventional weapons. DEWs have been in the developing phase for years, and will soon become deployable. Several companies and organizations are striving bring of state-of-the-art products.

DEWs are electro-magnetic weapons, operating at the speed of light to cover long distances in seconds. The market segmentation is as follows:

The Directed Energy Weapon Market is expected to show robust growth from 2014 to 2020. The market size is estimated to grow four times its current size by 2020. The market is estimated to have a compound annual growth rate of 26% approximately. The current market trend sees bulk investments by leading defense industry players and increasing procurements by defense ministries across the globe. Investment in research and development is the industry trend followed by directed energy weapons industry. Technology trends include scaling of DEWs for high power. As the size of the recently integrated DEWs is huge and difficult to handle, there is a serious need to introduce new technology that will shrink their size. This need to shrink DEWs in size is one of the major technology trends in this market. The key players including Northrop Grumman, Raytheon, Lockheed Martin, and Boeing have bagged contracts from the U.S. government for the development and demonstration of DEWs. These huge investments will yield productive results in future and will bring a revolutionary change in the weapons industry. 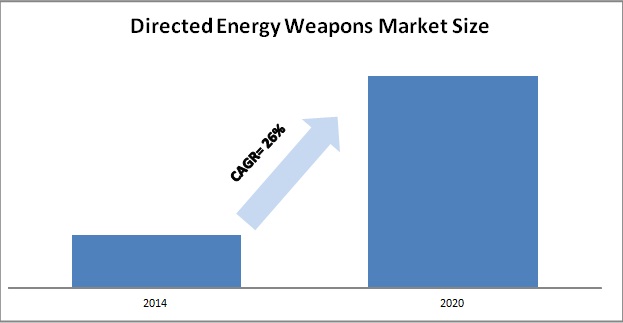 1.4.1 The DIRECTED ENERGY WEAPON MARKET WILL SHOW MOMENTOUS GROWTH IN ASIA-PACIFIC REGION BY 2020

APAC countries are facing internal and external threats from terrorists, forcing the region to strengthen its defense inventories. These recent conflicts between countries in the APAC region are driving procurements and investments.  In the future, APAC laser weapons could be carried by services platforms, such as the air force’s transport planes, fighters, and the navy’s destroyers and submarines.

China is the major player in the DEW market, and will be the largest in near future. A recent study says that China has shot a laser beam destroying guidance systems and causing its projectile to fall harmlessly to the ground. The study further noted that Beijing has been conducting tests on its new technology since August 1999, and that the system closely resembles the laser defense system technology being developed by the U.S. air force.

India’s Defence Research and Development Organization (DRDO) have recently planned to develop high-powered laser weapons technology to shoot missiles down. However, this program is still in the developing stages. India is working on a series of DEWs programs to improve anti-ballistic missile capability. By 2020, India is expected to bring out revolutionized weapons and a strong defense system.

The current regional scenario of directed energy weapons in illustrated in the below figure.