Skip to content Skip to blog sidebar
Home » Energy and Power » Digital Oilfield: Key to the Future of Oil and Gas Industry 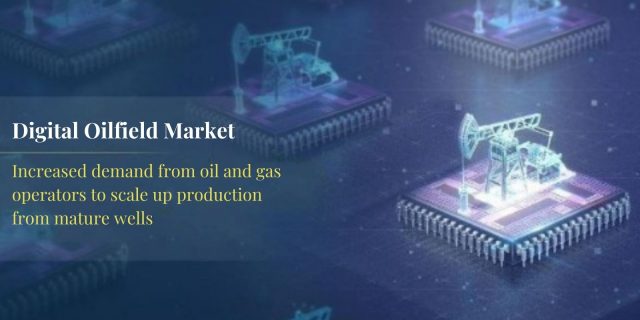 According to the new market research report “Digital Oilfield Market by Solution (Hardware, Software & Service, and Data Storage Solutions), Processes (Reservoir, Production, Drilling Optimizations, Safety Management), Application (Onshore and Offshore), and Region – Global Forecast to 2026″, published by MarketsandMarkets™, the global digital oilfield market size is expected to grow from an estimated USD 24.3 billion in 2021 to USD 32.0 billion by 2026, at a CAGR of 5.6%, during the forecast period. The key drivers for the digital oilfield market include new technological advancements in oil & gas industry; increased return on investment in oil & gas industry; and growing need for maximizing production potential from mature wells.

The onshore segment is the largest contributor in the digital oilfield market during the forecast period.

The onshore segment is estimated to lead the digital oilfield market. North America was the largest market for onshore application segment in 2020. Increasing number of onshore oil & gas and mature fields is expected to drive the digital oilfield market. Onshore wells are extensively drilled globally, with more oil and gas production potential from regions such as the Middle East, North America, Africa, and Asia Pacific. The demand for digital oilfield services and solutions in the onshore application segment is increasing as the cost incurred in oil & gas activities such as drilling and well completion is less onshore compared to the offshore application. The complexity in deepwater drilling, along with the increasing adoption of digital oilfield techniques in regions such as the Middle East and North America, where the maximum oilfields are located onshore, is expected to drive the market for the onshore segment.

The production optimization segment is expected to be the largest share of digital oilfield market.

Europe is expected to be the largest digital oilfield market

Europe accounted for the largest share of the global digital oilfield market in 2020. The scope of the European market includes the UK, Norway, Russia, and the Rest of Europe. The Rest of Europe includes Denmark, Italy, and Germany, among others. According to the International Energy Agency, the total crude oil produced by the region in 2019 was 17.1 million barrels per day, which declined by 0.05% as compared to 2018. Moreover, new explorations and field development activities are increasing, thus increasing the opportunities for developing new fields digitally.

Moreover, Europe is a leading region for offshore activities as the oil operators and oilfield service (OFS) providers are targeting the new fields and reserves from the UK and Norwegian continental shelf. For instance, Equinor, a Norwegian oil upstream operator, explored oil in the Johan Sverdrup field, which was under development, and started production in 2019. In the Johan Sverdrup, Equinor awarded a contract to Alcatel Submarine for reservoir management. Such projects create a strong market for digital oilfields in Europe. As per the BP Statistical Review 2020, Russia and Norway held approximately 72.2% of the total oil reserves in the European region in 2019. As per the EIA, countries such as Russia, France, Ukraine, and Poland have considerable shale gas resources, and further development of these reserves in these countries is expected to drive the growth of the digital oilfield market in the region. According to Baker Hughes’ Worldwide Rig Count report for March 2019, the rig count in the European region had observed a consistent growth from the last six months. This growth trend creates opportunities for the digitalization of more oil fields in the region. Also, the rising Brent prices and the demand for the Brent basket are driving the digitalization of oil fields in Europe. Digitalization helps in creating an accurate analysis of the data, thus decreasing the time of production from the wells.

The European Unconventional Oil and Gas Assessment (EUGOA) study incorporates data for a total of 82 shale formations within 38 geological basins covering 21 countries of Europe. These untapped sources create opportunities for new field developments in the region, which will demand the digitalization of the oil fields. The European Union has also revised its offshore regulatory regime and incorporated new regulations on the safety of oil and gas operations. According to the new regulations, the oil & gas companies are mandated to submit a special report before commencing any offshore drilling operations in the region on the major possible hazards that their operations may have on the environment.

The key players in the Digital Oilfield Market include companies such as Halliburton (US), Schlumberger (US), Baker Hughes (US), Weatherford International (US), and NOV (US).