Skip to content Skip to blog sidebar
Home » Uncategorized » Electric Traction Motor Market May Reach to $22.2 billion by 2027 at CAGR of 12.6% 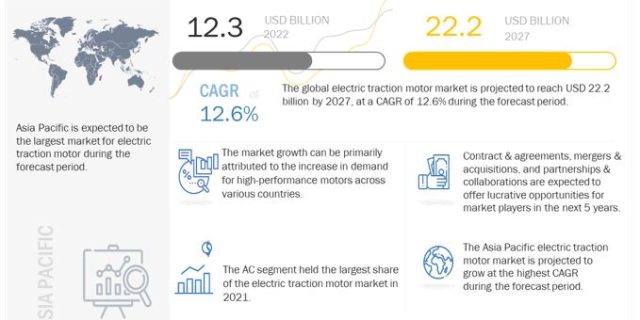 The global electric traction motor market is projected to reach USD 22.2 billion by 2027 from an estimated market size of USD 12.3 billion in 2022, at a CAGR of 12.6% during the forecast period. The increase in demand for high-performance motors, favorable government policies and subsidies, and the rise in investments in the railway sector are likely to drive the market growth.

The AC segment is expected to be the fastest growing segment, by type, during the forecast period

Below 200 kW is expected to be the fastest growing segment in the electric traction motor market, by power rating, during forecast period

Asia Pacific: Projected to be the largest market for electric traction motors during the forecast period

To enable an in-depth understanding of the competitive landscape, the report includes the profiles of some of the top players in the electric traction motor market. These players include Siemens Energy ABB (Switzerland), Mitsubishi Electric Corporation (Japan), TOSHIBA CORPORATION (Japan), General Electric (US), and Siemens (Germany).