The electroactive polymers market is estimated at USD 3.51 billion in 2017 and is projected to reach USD 5.12 billion by 2022, at a CAGR of 7.9% between 2017 and 2022. Mergers & acquisitions and new product launches are the key strategies adopted by the major players to strengthen their footholds in the electroactive polymers market. The Asia Pacific region, followed by the North American and European regions witnessed the maximum number of strategic developments undertaken by various players between 2012 and 2017.

The key players operating in the electroactive polymers market are Solvay (Belgium), Parker Hannifin (US) Agfa-Gevaert (Belgium), 3M (US), Merck (Germany), Lubrizol (US), Novasentis (US), Premix (Finland), and PolyOne Corporation (US), among others.

Parker Hannifin (US) is one of the leading manufacturers of electroactive polymer based sensors and actuators. The company has been focusing on new product launches to maintain its leading position in the electroactive polymers market. For instance, in June 2016, the company launched the SensoNODE High-Strain sensor highlighting EAP technology. SensoNODE High-Strain is prepared with a stretchable polymer which can take precise interpretations and readings for a long period of service life.

Solvay (Belgium), and Merck (Germany) are other major players in the Electroactive Polymers Market. For instance, in January 2016, Solvay completed acquisition of the Ryton PPS (Polyphenylene Sulphide) business from Chevron Phillips Chemical Limited (US). Solvay has bought 2 Ryton PPS resin manufacturing units in Borger, Texas. The acquisition is a part of Solvay’s strategic development into a more specialized solution provider.

In November 2015, Merck (Germany) acquired Sigma-Aldrich (US), which has provided Merck the capability of serving life science clients worldwide through this acquisition with a competent set of products. This acquisition also enhanced the position of the company in the electroactive polymers market.

Attributes, such as low cost of materials, ease of synthesis, lightweight, and flexibility are expected to drive the growth of the electroactive polymers market from 2017 to 2022

EAPs are polymers that possess electrical properties similar to metals along with the mechanical properties of polymers. Polymer doping helps enhance these properties and makes EAPs more preferable to metals or other polymers. EAPs find applications in various end-use industries because of their unique properties. Contrary to conventional materials (metals), EAP products are lighter in weight, durable, and have better conductive properties. Moreover, these polymers can develop a strain of more than 100% and have high actuation pressure per unit mass, which provide maximum (100%) change in shape. Among types, the inherently conductive polymers segment is projected to grow at the highest CAGR between 2017 and 2022. Inherently conductive polymers are undergoing extensive R&D activities, as these are also expected to have potential applications in the field of robotics, energy harvesting, coatings, medicals, and smart fabrics. Inherently conductive polymers exhibit excellent optical and electrical properties, high transparency, high environmental stability, low cost, and high process ability in comparison to other EAPs.

Some of the key players operating in the electroactive polymers market are Solvay (Belgium), Parker Hannifin (US) Agfa-Gevaert (Belgium), 3M (US), Merck (Germany), Lubrizol (US), Novasentis (US), Premix (Finland), and PolyOne Corporation (US), among others. Most of these companies have adopted new product launches and mergers & acquisitions strategies to strengthen their positions in the electroactive polymers market. 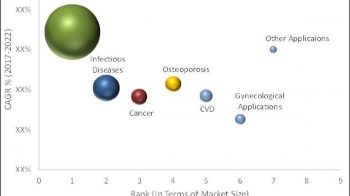