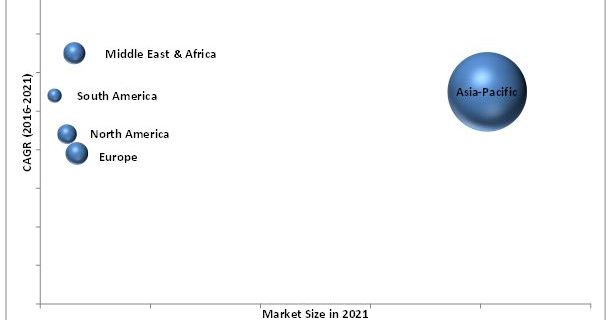 The global rice husk ash market is projected to reach USD 2.54 billion by 2021, at a CAGR of 5.4% from 2016 to 2021. The construction industry is one of the largest end users of rice husk ash (RHA). The increasing urbanization, infrastructure development in emerging economies, and the growing demand for cost-effective construction solutions have influenced the construction industry to innovate in terms of mineral admixtures. Huge differences can be witnessed in structures built today as compared to the ones built over a decade ago. Among the various commercially available mineral admixtures, including fly ash and silica fume, RHA is considered to be the most cost-efficient solution for a wide range of applications and requirements.

In September 2016, Usher Eco Power Limited (India), a subsidiary of Usher Agro Ltd., has started the development of a new rice husk-based biomass power plant of 18MW capacity in Uttar Pradesh, India. The company is focusing on setting up a silica extraction facility which will use rice husk ash generated from the aforementioned plant. Under an agreement, the end product (RH silica) from the facility will be supplied to the Goodyear Tire & Rubber Company (U.S.). With the help of its strong domestic as well as international networks, the company has adopted varied developmental strategies to market its rice husk ash to local as well as global players. The company actively promotes the usages of rice husk for power generation. It supplies rice husk from its production sites to its subsidiary Usher Eco Power Limited, which is engaged in the production of power through the incineration of rice husk.

Yihai Kerry Investments Co., Ltd. is another key player in the rice husk ash market. In June 2015, the company had signed a supply agreement with Goodyear Tire & Rubber Company (U.S.) to source rice husk ash. Goodyear plans to use silica derived from rice husk ash as a reinforcing agent in tires. Yihai has been actively strengthening the export capacity of its rice husk ash to meet the demand from Southeast Asian countries as well from Europe and North America. It also strategizes to build a strong distribution network globally by partnering with end users and converters in the value chain, such as Goodyear Tire & Rubber Company.