HPAPIs are extremely effective pharmacologically active ingredients. They are highly specific in their action and offer significant efficiency even at low daily therapeutic doses. HPAPIs have the ability to target precise disease cells and are, hence, used in formulations for highly potent drugs.

Owing to their target release characteristics, HPAPIs find major applications in target therapies for cancer. Globally, there is a significant growth in the incidence of cancer. According to the WHO, in 2012, there were 14.1 million new cancer cases, 8.2 million cancer deaths, and 32.6 million people living with cancer (within 5 years of diagnosis) worldwide. The American cancer Society estimated that over 15.5 million American citizens were suffering from cancer as of January 2016, with over 1,688,780 new cancer cases expected to be diagnosed in 2017.

This growth in the number of cancer cases has a tremendous impact on the sales of cancer drugs across the globe. According to an article published in Nature Reviews, the pharmaceutical industrys 20 top-selling cancer drugs generate annual sales of over USD 50 billion worldwide, with Roche’s Rituxan, Avastin, and Herceptin in the leading position generating USD 21 billion in sales.

The growth in High Potency APIs Market is driven by factors such as increasing demand for oncology drugs, growing demand for antibody-drug conjugates, increasing focus of leading pharmaceutical companies on HPAPIs, advancements in HPAPI manufacturing technologies, and growing focus on precision medicine.

Emerging economies such as India, China, and the Middle East present high growth opportunities for players in the HPAPI market. In most of these geographies, the market is expected to show a high growth rate in the coming years owing to their huge population, increasing prosperity, and improving longevity (albeit at differing rates).

Diseases like musculoskeletal diseases, glaucoma, and specifically cancer have a significant impact on the health status of people worldwide, with comparatively higher growth rates in developing countries. According to the WHO, in 2014, nearly 66% of all cancer-related deaths occurred in developing countries. Additionally, according to GLOBOCAN 2012, a total of 6.8 million new cancer cases were reported in 2012 in Asia; this is expected to reach 8.4 million cases by 2020, indicating an increase of ~24%.

Furthermore, developing regions have lenient and flexible regulations, which make these markets highly lucrative for providers who are unable to meet the stringent standards set by the federal government in the US. Moreover, developing countries like India and China offer extremely low manufacturing and labor costs and highly skilled labor; this encourages players in developed regions to invest in this market.

One of the major challenges faced by the players in High Potency APIs Market, especially CMOs that offer HPAPI manufacturing services, is the continual evolution of industry standards, technologies, and regulations. Companies that are willing to enter this marker are required to adopt these newer technologies, which generally translates to huge investments. For example, SAFC (US) had to upgrade its HPAPI manufacturing facility in the US in 2016 to include more robust analytical technologies with improved sensitivity and detection levels that allow for the determination of potential API carryover at part-per-billion levels. Such a rapidly evolving environment poses a challenge to the players in High Potency APIs market.

North America to dominate the HPAPIs market in 2018

In 2018, North America is expected to account for the largest share of the market followed by Europe. Factors such growing incidence of cancer, increasing investments in cancer research, technological advancements in HPAPI manufacturing, growing CMOs market, constructive government reforms like the Patient Protection and Affordable Care Act, growing focus of leading pharmaceutical companies in the HPAPIs segment, and increasing demand for antibody-drug conjugates (ADCs) are responsible for the large share of North America in the global HPAPI market.

The HPAPI market is fragmented, with the presence of several large as well as emerging players. Prominent players in the HPAPIs market include Pfizer (US), Novartis International AG (Switzerland), Sanofi (France), Boehringer Ingelheim (Germany), Bristol-Myers Squibb (US), Teva (Israel), Eli Lilly and Company (US), Merck (US), AbbVie (US), Mylan (US), and F. Hoffmann-La Roche (Switzerland).

Players in this market are adopting various organic and inorganic strategies, such as agreements, collaborations, alliances, and partnerships; mergers and acquisitions; and expansions. 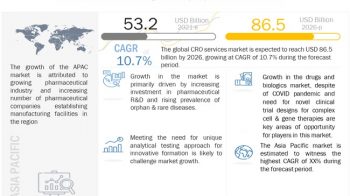