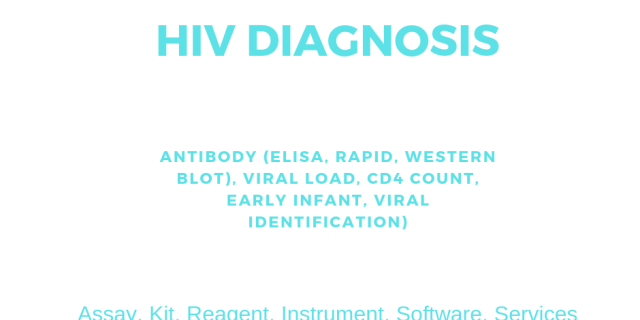 Growing worldwide prevalence of HIV/AIDS, increasing number of blood transfusions and blood donations, benefits offered by point-of-care instruments and kits, and increasing government initiatives are expected to drive the growth of the market worldwide.

This increasing prevalence of HIV across the globe will result in an increased need for diagnostic and testing procedures, which in turn will boost the HIV diagnostics market growth.

Point-of-care (PoC) HIV tests are also known as rapid HIV tests. In regular practice, HIV diagnosis includes pre-test counselling, HIV testing, and post-test counselling wherein patients are required to return for test results at later dates. In PoC HIV diagnosis, counselling and screening are carried out simultaneously while the patient is still in the lab. This is followed by confirmatory tests, if needed. Since pre-test and post-test counselling are carried out at the same in PoC tests, individuals are not required to return for their results, making it a very convenient option.

Rapid HIV tests provide results in less than 30 minutes, eliminating the stress of waiting for results. These tests detect antibodies in the serum/blood but the detection window is 3–4 weeks. Rapid HIV testing mainly targets undiagnosed cases for HIV as well as those who have not returned for follow-up testing. As a result of their various advantages, the demand for technologically advanced PoC kits and instruments is on the rise, which is expected to aid in the growth of the HIV diagnostics market in the coming years.