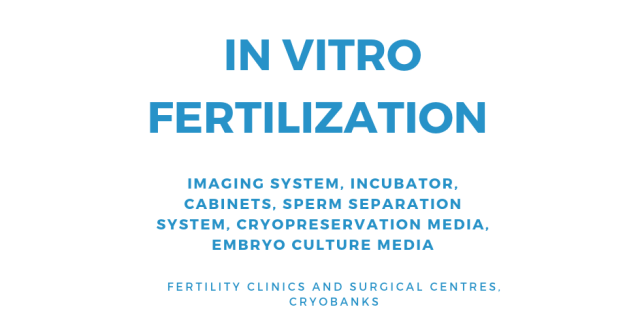 Growth in the median age of first-time motherhood, declining fertility rates, rising male infertility, rise in consumption of alcohol and cigarettes, and growing public awareness about infertility and the available treatment options. However, the high cost and low success rate of the IVF treatment and restrictive regulation and ethical concerns are expected to restrict the growth of market to a certain extent.

Rise in consumption of alcohol and cigarettes

The growing consumption of alcohol and cigarettes is linked to rising infertility rates among both men and women across the globe. Worldwide alcohol consumption per person aged 15 years or older is 6.2 liters annually. According to the University of Washington’s Institute for Health Metrics and Evaluation, in 2012, 8.2% of all Americans were considered to be heavy drinkers, and 18.3% were binge drinkers in the US. Drinking alcohol affects the reproductive system. Heavy drinking drastically affects a woman’s menstrual cycle and ovulation, which leads to infertility.

Thus, growing cigarette and alcohol consumption is expected to result in increased infertility rates, which in turn, will propel the IVF market growth.

VF has been a cause of moral, ethical, and religious controversy since its development. The major opposition to IVF treatment has come from the Roman Catholic church, which issued a doctrinal statement in 1987 opposing IVF on three grounds—the destruction of human embryos in the case of unsuccessful IVF cycles; the possibility of IVF by a donor other than the husband, thus removing reproduction from the marital context; and the severing of an essential connection between the conjugal act and procreation.

The sperm, egg, and embryo donation techniques are utilized for IVF treatment. However, authorities in some countries have implemented regulatory restrictions on their donation. For instance, countries such as Italy and Austria restrict sperm donations for assisted reproductive technology; whereas, Switzerland, Hungary, Spain, and the Czech Republic allow only anonymous donations. Furthermore, Sweden permits non-anonymous egg donations. In countries like Iceland, frozen sperm is required to be destroyed if the male partner dies, whereas in Belgium and the Netherlands, sperm can be retained for future use in fertility treatment.

Geographically, the in vitro fertilization market in Asia Pacific accounts for the largest share of the global market, followed by Europe. The large share and high growth rate of the APAC region can be attributed growth in the median age of first-time motherhood, rising infertility rates, growing prevalence of PCOS, increasing incidence of obesity, rise in fertility tourism, and government initiatives.

However, the high cost of the procedure and restrictive regulations and ethical concerns is likely to restrain the growth of the market during the forecast period.