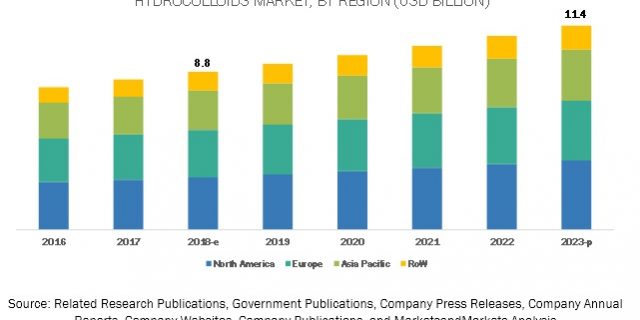 The hydrocolloids market is estimated to be valued at USD 8.4 billion in 2018 and is projected to reach USD  11.4 billion by 2023, at a CAGR of 5.3% during the forecast period. The growth of the hydrocolloids market is driven by factors such as the expansion of the processed food industry due to the increasing demand for convenience foods in regions such as the Asia Pacific, South America, and the Middle East & African. Apart from this, manufacturers are engaged in R&D to offer high-quality hydrocolloids due to its multi-functionality in the food industry.

By source, the botanical segment is projected to be one of the fastest growing segments for the hydrocolloids market due to the increased demand for natural products and ingredients. Some of the popular hydrocolloids of botanical origin used by manufacturers of the food & beverage industry include gum arabic, gum tragacanth, gum karaya, and gum ghatti.

By type, guar gum is projected to be the fastest growing segment in the hydrocolloids market. Derived from the guar plant, it finds applications in the food, pharmaceutical, and cosmetics industries. In the food industry, it is used as a thickening and binding agent. It is used in a wide variety of food products such as ice cream, baked goods, cheese, soups, gravies, noodles, and meat. In addition, it is used in cosmetics products such as lotions, creams, and shampoos. In the pharmaceutical industry, it is used as a binder in tablets. Expansion of the food processing industry in the developing countries is projected to boost the sales of guar gum in the coming years.

By function, the stabilizers segment is considered to be one of the fastest-growing segment in the hydrocolloids market. Hydrocolloids used as stabilizers include locust bean gum, guar gum, carboxymethyl cellulose (CMC), xanthan gum, alginate, and carrageenan. The increasing demand for convenience foods in emerging countries is projected to drive the demand for hydrocolloids in the coming years.

North America is the fastest-growing market for hydrocolloids and is projected to record the highest CAGR during the forecast period. The North American market is completely driven by the US, which accounted for nearly 84.0% of the market share in 2017. The US has a large market for bakery, confectionery, convenience food, and packaged food products; hence, it constitutes a major share in the market. Consumers in the US are calorie-conscious, due to which low-calorie and low-fat foods are popular in the country. The increasing prevalence of obesity and cardiac diseases have led to an increasing demand for natural and low-calorie food products among consumers. Food manufacturers are therefore concentrating on the application of natural hydrocolloids and their functions as fat replacers.

Hydrocolloids manufacturers are focusing on product innovations to expand the consumer base in this space. Leading players operating in the hydrocolloids market include DowDupont (US), Ingredion (US), Cargill (US), Kerry (Ireland), Archer Daniels Midland Company (US), Palsgaard (Denmark), Darling Ingredients (US), CP Kelco (US), Ashland (US), BASF (Germany), Tate & Lyle (UK), Glanbia (Ireland), Fuerst Day Lawson (UK), Koninklijke DSM N.V (Netherlands), and Nexira (France). Expansion of the food processing industry due to the increased demand for convenience foods in the emerging countries of the Asia Pacific and South America is projected to create lucrative opportunities for hydrocolloids manufacturers in the coming years.

Essential Oils Market is Predicted to Expand $16.0 billion by 2026