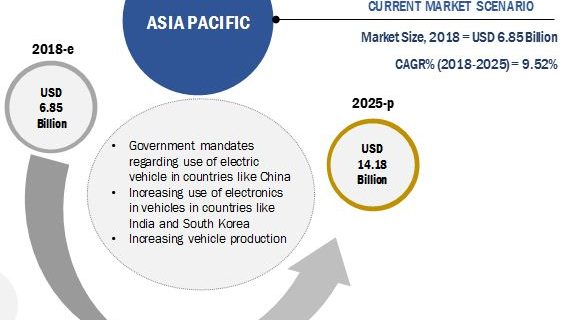 The automotive industry has witnessed a shift in technology from the use of mechanical systems to electrical systems. With the advancement of mechatronics, linear as well as rotational motions in vehicles can be achieved using electrical prime movers. As electric content in cars has increased steadily in the last two decades, vehicle electronics have become a key product differentiator for automakers in recent years. In developing countries, the adoption of advanced safety features in vehicles is driven by regulatory bodies and consumer interest. The increasing adoption of advanced safety features, in turn, increases the number of electronic devices in the vehicle. Hence, the number of wiring harnesses that connect electrical devices has been increasing year-on-year. The addition of cameras and other safety-related sensors, along with multiple terminals needed for battery packs used in electrified powertrains, is driving the growth of the automotive terminal market. Automotive terminal manufacturers utilize a good portion of their engineering resources to develop new products or improve existing terminals for the automotive industry, which itself is focused on improving fuel mileage and reducing the use of lead (RoHS), cost, and vehicle weight.

The global automotive industry has witnessed a transformation during the last decade with digital communication technologies making rapid inroads in vehicles. Connected, autonomous, and semi-autonomous vehicles are more like a future package of new automotive technology. These breakthrough technologies are transforming the traditional structure of the automotive industry by bringing in a new business model and changing the nature of the automotive industry. As automakers are developing a variety of modern technologies that will make vehicles far more digitally connected than they are now, vehicles in the future will be very different from the ones vehicle drivers are familiar with. Microprocessors, microcontrollers, sensors, communication modules, and battery electronics are digitally connected with each other with the help of hardware and software. These connected and autonomous vehicles require a huge amount of electrical connections and terminations of hardware to battery electronics. These technologically advanced vehicles will have long wiring harness systems and a good amount of harness components like connectors and terminals. With the huge amount of reliability of connected software and hardware inside a vehicle, a continuous supply of power will be needed from the battery packs. Automotive terminals play a vital role in the continuous supply of power for hardware and software inside a vehicle. Advancements in termination technology would create new revenue pockets for automotive terminal manufacturers. This is expected to boost the automotive terminal market in the future.

The above 100 A segment of the automotive terminal market, by current rating, is expected to grow at the highest CAGR during the forecast period. It is followed by the 41–100 A and below 40 A segment. However, below 40 A segment is estimated to account for the largest share in the automotive terminal market, following its wide applications in electronics content in a vehicle. The Asia Pacific region is estimated to account for the largest market share in the below 40 A segment. Below 40 A terminals are used in passenger vehicles for mirror control, speedometer, headlamps, etc.