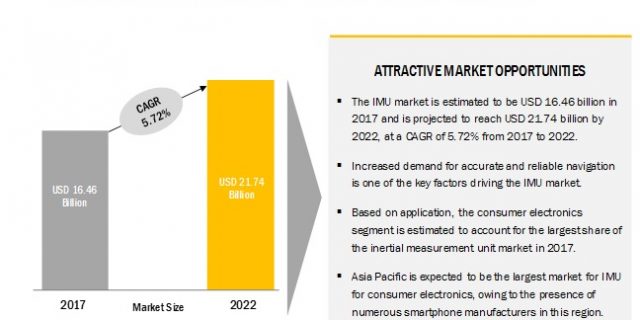 The Inertial Measurement Unit (IMU) Market is projected to grow from USD 15.71 billion in 2016 to USD 21.74 billion by 2022, at a CAGR of 5.72% during the forecast period. The base year considered for the study is 2016 and the forecast period is from 2017 to 2022. Increasing demand for accuracy in navigation, high volume production of smartphones, and availability of miniaturized components at affordable prices are some of the key factors driving the inertial measurement unit market.

Based on application, the space launch vehicle segment is estimated to be the fastest-growing application segment during the forecast period.

The space launch vehicle segment is estimated to be the fastest-growing application segment in the inertial measurement unit market during the forecast period. This growth is attributed to an increase in satellite launches and increasing space research and exploration activities.

Based on technology, the MEMS segment holds the largest share in the inertial measurement unit market.

Based on technology, the MEMS segment held the largest market share in 2016. The large share can be attributed to technological advancements in MEMS that are resulting in its increased applicability in small aircraft and unmanned applications

By Grade, the space grade IMU segment is expected to lead the inertial measurement unit market in 2017

Based on grade, the space grade IMU segment is estimated to grow at the highest CAGR from 2017 to 2022. Space grade IMUs are used for space navigation applications as these applications require high accuracy, especially during the highly dynamic flight phases such as ascent, descent, entry, and landing of spacecraft. Factors such as increased investments in satellite manufacturing and associated satellite launches are contributing to the high demand for space grade IMUs.

The Asia Pacific, inertial measurement unit market, is projected to grow at the highest CAGR during the forecast period

Asia-Pacific is estimated to be the fastest growing market for IMUs during 2017 to 2022. Factors including the increase in defense budgets of emerging countries such as China and India, increasing air passenger traffic in the region, and significant demand for smartphones and automobiles owing to increase in disposable income of the middle-class population, among others, are driving the market growth in this region