Skip to content Skip to blog sidebar
Home » Pharmaceuticals » Latin America Pharmaceutical Excipients Market worth $579 Million by 2024, at a CAGR of 7.5%. 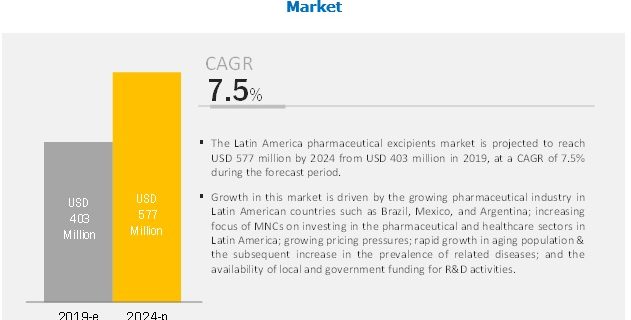 Growth in this market is driven by the growing pharmaceutical industry in Latin American countries such as Brazil, Mexico, and Argentina; increasing focus of MNCs on investing in the pharmaceutical and healthcare sectors in Latin America; growing pricing pressures; rapid growth in aging population & the subsequent increase in the prevalence of related diseases; and the availability of local and government funding for R&D activities.

By functionality, the filler & diluents segment accounted for the largest share of the Latin America pharmaceutical excipients market