The global pharmaceutical excipients market is projected to reach USD 9.7 billion by 2025 from USD 6.9 billion in 2019, at a CAGR of 5.8% during the forecast period.

The leading market players are based across developed countries such as the US, Germany, France, the UK, and Ireland. Various small and medium-sized players operating in both developed and emerging markets are making this a highly competitive market. On the other hand, dominant market players have numerous advantages such as stronger marketing & distribution networks, greater budgets for R&D, and better brand recognition.

The market also shows the presence of numerous small players operating at the global as well as the regional levels. Companies are increasing their focus on R&D to add innovative products to their portfolios, which, in turn, helps them strengthen their market presence. In addition to this, the lucrative growth opportunities in the relatively untapped APAC market are encouraging market players to strengthen their presence in this region.

DuPont (US) brings together the complementary portfolios of Dow and DuPont, making it one of the world’s largest chemical corporation. The company accounted for the largest share of the global pharmaceutical excipients market in 2018. The acquisition of FMC’s Health & Nutrition business in November 2017 alleviated the company’s position in the global pharmaceutical excipients market by bringing an extensive range of products under one roof. The company offers a comprehensive portfolio of excipients ranging from rheology modifiers, tablet coatings, controlled release, stabilizers, solubilizers, binding agents, and masking agents, to name a few.

The company is largely known for its diversified cellulose compound offerings for the pharmaceutical industry. Its leading position among the top five pharmaceutical excipient manufacturers is attributed to its global footprint through distributors and agents. The company is highly focused on conducting strategic agreements and expansions of its functional units.

Roquette (France) is also identified as a major player in the global pharmaceutical excipients market in 2018. This is mainly attributed to its exhaustive portfolio of diluents, binders, coatings agents, sweeteners, and dispersants. This company is growing at a rapid pace in this market, with the adoption of various organic and inorganic growth strategies. In line with this, Roquette acquired the company, Itacel, which is the excipient division of Blanver, in Brazil, September 2017. This acquisition positively impacted the company’s revenue and increased its market presence in the North and Latin American regions.

Ashland (US) was identified as the third major player in the pharmaceutical excipients market in 2018.The company has a diversified product portfolio, which comprises of a wide range of tablet binding, tablet disintegration, tablet film coating, solubilizers, and rheology modifier excipients. Ashland’s leading position in the market is attributed to its research and development activities, strong manufacturing capabilities, and wide distribution footprint across the world, which enables it to serve customers in more than 100 countries. The company’s growth strategy for the pharmaceutical excipients business mainly concentrates on expanding its product portfolio and meet rising consumer demand.

Animal Parasiticides Market worth $13.7 billion by 2026 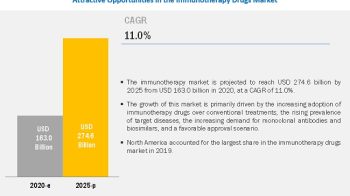 Who are the key manufacturers in the Immunotherapy Drugs Market?