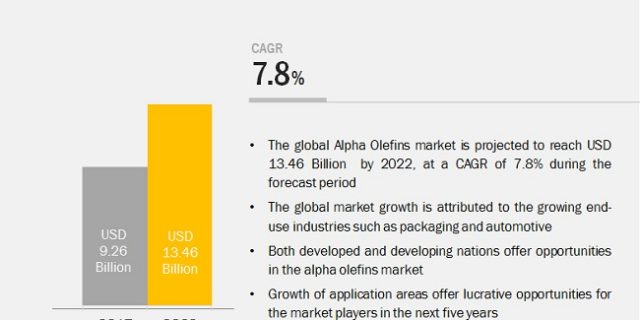 According to the new market research report “Alpha Olefins Market by Type (1-Butene, 1-Hexene, 1-Octene, 1-Decene, 1-Dodecene), Application (Polyolefin Co-monomers, Surfactants and Intermediates, Lubricants, Fine Chemicals, Plasticizers, Oil Field Chemicals), and Region – Global Forecast to 2022″, published by MarketsandMarkets™, the Alpha Olefins Market size was USD 8.76 Billion in 2016 and is projected to reach USD 13.46 Billion by 2022, at a CAGR of 7.8% during the forecast period.

The global alpha olefins market has a large number of market players; however the market is led by some major players, such as Shell (The Netherlands), Chevron Phillips (US), Ineos (Switzerland), SABIC (Saudi Arabia), Sasol (South Africa), Evonik (Germany), Dow Chemical (US), ExxonMobil (US), PJSC Nizhnekamskneftekhim (Russia), and Qatar Chemical Company Ltd. (Qatar), among others.

Most of these companies are leaders in the alpha olefins market and are focusing on capturing the full value chain to achieve economies of scale and product innovations in order to strengthen their market shares.

Growth of the automobile and packaging industries in the Asia-Pacific is also expected to lead to the growth of the alpha olefins market. Additionally, factors such as increasing population, higher disposable incomes, higher standards of living, rising consumption of packaged food, and increasing automobile manufacturing facilities are also expected to contribute to its growth in the region.

Shell (The Netherlands) is amongst the leading suppliers of alpha olefins. The company adopted expansions as a strategy to maintain its premium position in the market. For instance, in November 2015, it expanded its production capacity at its chemical manufacturing site in Louisiana (US). Similarly, in March 2015, it also invested at its Wesseling (Germany) plant to upgrade the steam cracking unit to produce heavy olefins and aromatics.

Chevron Phillips (US) also adopted the expansions strategy to sustain its premium market position. For instance, in December 2014, it expanded its ethylene business by increasing production capacity at its manufacturing facility in Texas. This expansion helped the company in supporting the growth of its olefins business.