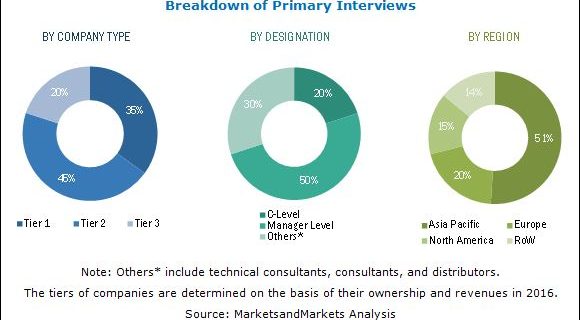 The PTFE films market was valued at USD 420.6 million in 2016 and is projected to reach USD 542.6 million by 2022, at a CAGR of 4.4% from 2017 to 2022. The increasing preference for PTFE films in medical & pharmaceuticals application is projected to drive the growth of the PTFE films market. PTFE films are preferred in high-performance applications owing to their unique properties, such as chemical inertness, low friction, high temperature tolerance, non-flammability, high insulation, and durability.

The PTFE films market is expected to witness significant growth between 2017 and 2022, in terms of value and volume. Key players operating in the PTFE films market include Saint-Gobain (France), Guarniflon (Italy), Nitto Denko (Japan), 3M (US), and Rogers Corporation (US). These companies have adopted various growth strategies to expand their global presence and increase their market shares. Expansions & agreements, mergers & acquisitions, and new product launches are key growth strategies adopted by market players to strengthen their foothold in the PTFE films market.

The growth of the PTFE films market was largely influenced by mergers & acquisitions in the past few years. Maximum number of developments were reported in 2016. Expansions and new product launches were among the key development strategies adopted by leading players in this market to widen their customer base.

Saint-Gobain is one of the key players operating in the PTFE films market. The company offers a variety of skived and cast PTFE films under the brand names of Chemfilm and Norton. The company has a strong global reach, and its production facilities and sales offices are spread across 67 countries worldwide. In 2016, the company acquired H-Old (Italy), a prominent market player in high-performance plastics application in Europe. This acquisition strategy enabled Saint-Gobain to enhance its performance plastics business.

Guarniflon, another key player in the PTFE films market, adopted the strategy of mergers & acquisitions to strengthen its market position. In June 2016, the company acquired PATI (P.A.T.I. S.p.A) (Italy), which offers thermoplastic solutions in the agricultural and architectural membranes markets. This acquisition enabled Guarniflon to offer a wide range of high-performance films and adhesives to its potential customers. The company offers PTFE films under the brand names, Teklease, Tekfilm, and Tekbond. It primarily focuses on product innovation to enhance its existing line of products. Guarniflon has a strong global reach and an extensive distribution network.