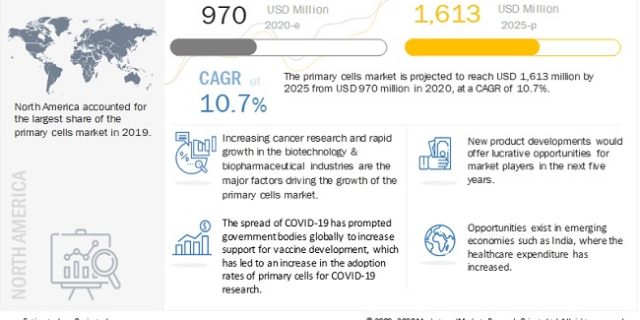 According to the new market research report by MarketsandMarkets, global primary cells market is projected to reach USD 1,613 million by 2025 from USD 970 million in 2020, at a CAGR of 10.7%.

Market growth is driven by the rising prevalence of cancer, increasing cancer research, rising investments in regenerative medicine research, rising demand for monoclonal antibodies, and rapid growth in the biotechnology and biopharmaceutical industries.

Cancer, which has become the leading cause of death globally, accounted for 9.6 million deaths in 2018. The growth in the prevalence of this disease has resulted in a need to conduct extensive research for diagnosis and treatment; primary cells form an important part of this research. These cells are ideal models for cancer biomarker discovery and drug screening.

North America is the largest regional market for primary cells

Get 10% FREE Customization on This Report: https://www.marketsandmarkets.com/requestCustomizationNew.asp?id=32854960

Primary cell culture contamination is one of the most common problems encountered in cell culture laboratories. The use of contaminated cells endangers cell physiology and often leads to incorrect results or causes the loss of unique cell lines. Contamination in cell cultures not only slows down cell metabolism but can also contaminate final products such as vaccines, which can destroy the entire batch.