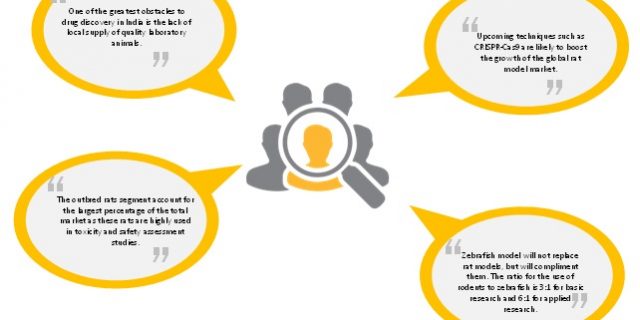 According MarketsandMarkets Research – The Rat Model Market is expected to reach USD 588.9 million, at a CAGR of 8.7%.

The Continuous support in the form of investments and grants, and personalized medicine fueling the demand for personalized humanized rat models are some of the factors driving the growth of the rat model market. The rat model market is expanding with the increase in R&D activities in pharmaceutical industries. These rat model are being used in many applications such as toxicology, oncology, diabetes, neurology, immunology and infectious diseases, and others (rare disease, cardiovascular, metabolic disease, hematopoiesis, and regenerative medicines).

The development of advanced rat genome manipulation techniques (such as creation of transgenic rats and knockout rats), drives the global rat model market.

Preclinical animal models, such as mice and rats that are used to predict drug efficacy and toxicity in humans, are needed. Rats are commonly used due to their genetic similarity to humans as well as their unlimited supply and ease of manipulation. Knockout rats are produced by inactivating/silencing or “knocking out” an existing gene and replacing it with an artificial piece of DNA, thereby resulting in the loss of gene activity. This leads to changes in the rat’s phenotypic characteristics, such as appearance, behavior, and other observable biochemical characteristicsc.

Rat models serve as suitable animal models for detailed and accurate analysis of the mechanism of human neurodegenerative diseases. They help in the development and evaluation of new therapeutic strategies. Transgenic rat models are available for several neurological human conditions such as prion diseases, human retroviral diseases, Alzheimer’s disease, Parkinson’s disease, motor neuron diseases, anxiety, and others. Rat models for anxiety disorder have been useful for providing information on brain and behavioral mechanisms involved in the etiology and physiopathology of anxiety disorder.

Rats are considered to be excellent experimental models for understanding the complex genetic basis of diseases such as diabetes. Due to the ever-increasing prevalence of diabetes globally; it has become important to study the mechanism of the disease. However, it is quite difficult to carry out research studies in human beings, owing to problems such as genetic heterogeneity and lack of controlled lifestyles. Rat models act as suitable models to study specific genetic mutations and to understand the function of genes on a homogeneous genetic background.