The global ablation technologies market is poised to grow at a CAGR of 10.5% in the forecast period. This market is segmented into major regions, namely, North America, Europe, Asia-Pacific and Rest World (RoW). In 2015, North America accounted for the largest shares of the global ablation technologies market followed by APAC. The largest share of this region is attributed to several factors such as presence of large number of ablation product manufacturers, significant adoption of ablation treatment, large patient population base, and continuously rising prevalence of target patient population such as cancer and heart diseases (especially atrial fibrillation). However, APAC is poised to grow at the highest CAGR during the forecast period. This is primarily due to growing popularity of minimally invasive surgeries, government efforts to increase population access for elective surgery, rising focus of global players, large population base, and improving healthcare infrastructure facilities in the region.

In the Asia-Pacific region, the ablation technologies market in China is estimated to grow at the highest CAGR in the next five years. A number of factors such as rapid economic growth, huge population base, and government initiatives to develop a modern healthcare system with corresponding reimbursement facilities are the major drivers contributing to the growth of the ablation technologies market in China. In addition, the rising prevalence of cancer and cardiovascular diseases, aging population, and growing popularity of minimally invasive surgical procedures are some of the other factors contributing to the high growth rate of the Chinese ablation technologies market. Driven by its high growth potential, market leader Medtronic plc (U.S.) is expanding its innovation center in China to meet the increasing demand for ablation devices in the country. Moreover, the ablation technologies market in India is also expected to witness a robust growth in the forecast period. The evolving ablation technologies market in India offers remarkable growth opportunities for players due to factors such as the availability of skilled physicians and healthcare practitioners, lower cost of medical facilities compared to developed countries, and growing focus of international and domestic players on the Indian medical devices market. Furthermore, the combined efforts of government agencies and public sector organizations to increase healthcare awareness have enabled the Asia-Pacific and RoW (Latin America, Middle East, and Africa) regions to become attractive markets for ablation device manufacturers. 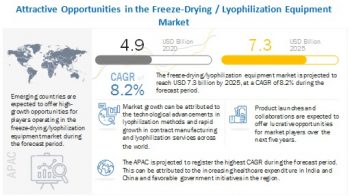 Forensic Equipments Market worth $8.7 Billion by 2024