According to the new market research report sterility testing market is expected to reach USD 941.0 Million by 2021 from USD 528.0 Million in 2016, at a CAGR of 12.3% from 2016 to 2021.
The growth of the sterility testing market can be attributed to the growth in the pharmaceutical and biotechnology industries, increase in the number of new drug launches, and increasing R&D in life science research.

Merck KGaA (Germany) dominated the sterility testing market in 2015. The company’s dominance in the market can be attributed to its robust product portfolio and strong geographic presence. The company focuses on organic as well as inorganic growth strategies for enhancing its market position. In September 2016, the company launched its Steritest Symbio Pump systems to enhance its product portfolio and increase its market presence. Furthermore, the company was focused on inorganic growth strategies. In November 2015, Merck KGaA acquired Sigma-Aldrich Corporation (U.S.); this acquisition helped the company strengthen its sterility testing product portfolio.

bioMérieux SA (France) held the third position in the sterility testing market in 2015. The company focuses on organic as well as inorganic growth strategies such as expansions and collaborations to enhance its market share. In March 2016, it entered into a distribution and co-development strategic partnership with Copan Italia S.p.A. (Italy). According to the terms of this agreement, bioMérieux SA and Copon will work together to distribute and develop solutions for microbiology laboratory automation and efficiency. Furthermore, the company was focused on organic growth strategies. In Octamer 2014, bioMérieux opened a new diagnostic testing facility in Isère, France. This facility enabled the company to develop new diagnostic solutions related to microbiology.

SGS S.A. (Switzerland) held the fourth position in the sterility testing market in 2015. The company adopted organic growth strategies such as expansions to boost its market share. In September 2016, SGS opened a new facility in Wiesbaden, Germany. The 500-m2 facility will provide extractables and leachables (E&L) testing to the pharmaceutical and related industries. This helped company to expand its quality control release testing capabilities at that facility. Also in December 2016, SGS acquired Quality Compliance Laboratories Inc. (U.S.). This acquisition helped the company to provide microbiological and analytical testing to pharmaceutical, nutraceutical, and cosmeceutical industries.

Based on the analysis of strategic developments undertaken by market players between 2013 and 2016, the key strategies followed by most companies in the sterility testing market are expansions and acquisitions. Some of the leading players that adopted this strategy include bioMérieux SA (France), Merck KGaA (Germany), Nelson Laboratories (U.S.), Sartorius AG (Germany), SGS S.A. (Switzerland), Thermo Fisher Scientific, Inc. (U.S.), Charles River Laboratories (U.S.), and WuXi AppTec (China). 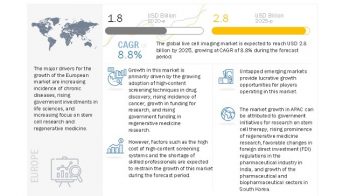