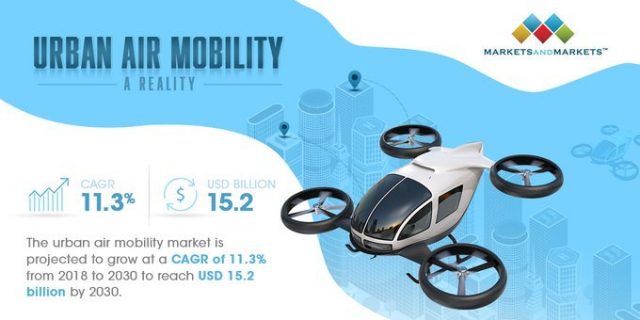 According to the latest market research report the Urban Air Mobility (UAM) Market is projected to grow from $5.3 billion in 2018 to $15.2 billion by 2030, at a CAGR of 11.33% from 2018 to 2030. The need to increase operational efficiency, reduction in human intervention for intercity and intracity transportation using eVTOLs, and growing investment activities around the world are key factors expected to drive the market growth.

Air Taxi – Air taxies or passenger drones are aerial vehicles that carry passengers from one place to another. The increasing urban population has resulted in the development of mass transportation solutions, such as metros and faster rail and bus services. One of the alternatives for mass transportation is passenger drones. Presently, they are in the development phase but are expected to commercialize in the coming years. Passenger drones can be piloted manually or flown autonomously. These drones have the capability to vertically take-off and land, making it easier for them to land in crowded locations in cities.

Personal Aerial Vehicle – Urban areas around the world are experiencing population crisis due to a significant migration of people from rural to urban areas for better living standards and easy access to urban services. Increasing disposal income in urban areas coupled with the development of smart cities has resulted in the development of personal aerial vehicles for intracity and intercity transportation. Personal drones are likely to be used for point-to-point pick-up and drop services in lesser time as compared to other modes of transportation.

Cargo Aerial Vehicle – Drones are presently used for various applications, such as precision agriculture, surveillance, inspection, and monitoring. Companies are also focusing on the use of aerial vehicles for intercity and intracity heavy cargo deliveries. To make this possible, solutions such as UAS stations, charging stations, landing pads, and other required infrastructures need to be in place. The cargo industry is trying to build large drones to transport international freight for about half the price of piloted aircraft. Japan is one of the few countries to have tested large UAVs for use in freight transport. Currently, two Swiss companies, namely, Swiss Post and Swiss WorldCargo, are also experimenting with drones for air freight solutions. Plans for commercial drones for freight have recently been announced by many companies, including Deutch Post (DHL), Zookal, Inc. (an Australian textbook service), and Amazon, Inc.

Air Ambulance – Healthcare industry is expected to witness a disruptive change with the introduction of air ambulance drones. Drones will help evacuate and transport victims from hot zones to the nearest hospitals. In January 2017, an Israel-based company introduced a flying medical/ambulance drone which can transport victims and deliver medical supplies. The drone has completed its initial trials and is expected to be in the market by 2020. Developments of medical/ambulance drones are also expected to help the militaries in quickly evacuating injured soldiers from the battlefield.

Some of the key players profiled in the urban air mobility market report include Kitty Hawk (US), Lilium (Germany), EHang (China), Volocopter (Germany), and A3 by Airbus (US).