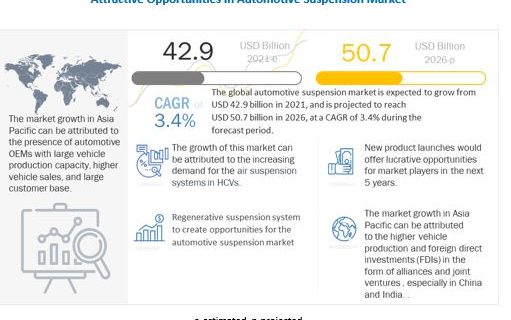 The Automotive Suspension Market is projected to grow from USD 42.9 billion in 2021 to USD 50.7 billion by 2026, at a CAGR of 3.4% during the forecast period. Automotive OEMs are investing in R&D activities to introduce innovative suspension systems to enhance ride comfort. For example, in August 2020, ZF Friedrichshafen designed air suspension with ECAS technology to address issues such as higher fuel consumption, decreased rider comfort, and compromised passenger safety and vehicular instability. The market for suspension systems is mainly driven by the increasing demand for luxury vehicles, especially passenger cars, and the increasing preference of buyers for a comfortable ride and smooth operation of the vehicle. Automotive OEMs are focusing on lightweight materials to enhance fuel efficiency and reduce vehicle emissions. The increasing sales of electric and hybrid vehicles is expected to increase the adoption of active and semi-active suspension and thereby drive the market for automotive suspension in the near future.

Active Suspension is the fastest growing market by system

MacPherson strut is the largest market for automotive suspension, by vehicle architecture

In terms of volume, the MacPherson strut architecture is expected to be a potential segment of the automotive suspension market during the forecast period. MacPherson strut eliminates the need for a separate upper control arm, which reduces the cost components and weight of the architecture. Countries such as China, India, and Japan opt for this cost-effective architecture, which is expected to drive the market during the forecast period.

Countries such as China, Japan, India, South Korea, and the Rest of Asia Pacific are considered under Asia Pacific for market analysis. The region is the leading producer of automotive suspension systems and is expected to retain its position in the coming years. It is the largest producer of economical cars in the world. However, due to the increasing demand for premium cars, OEMs have started investing and developing advanced technologies for the automotive industry. Although countries, such as Japan and South Korea, are the leaders in technology, India and China have the largest vehicle production in Asia Pacific.

Asia Pacific has emerged as a hub for automotive production in recent years, owing to changing consumer preferences, increasing per capita income of the middle-class population, and cost advantages for OEMs. Consumers in the region are inclined toward compact and cost-effective cars. The region has witnessed higher growth than the matured markets of Europe and North America due to the easy availability of labor, safety norms, and government initiatives for FDIs.  China, the world’s largest automotive market, remained the main driver of regional sales in Asia Pacific in 2020. The basic demand for new vehicles in China remains strong, given the country’s vehicle penetration rates (compared to that of developed markets) and its rapidly expanding replacement market. According to MarketsandMarkets Analysis, China is estimated to be the largest market for vehicles equipped with suspension systems, in terms of both, value and volume in Asia Pacific.