The global pain management devices market is projected to grow at a CAGR of 8.5% during the forecast period. This market is segmented into four major regions, namely, North America (U.S. and Canada), Europe (Germany, France, U.K., and Rest of Europe), Asia-Pacific (China, Japan, India, and Rest of Asia-Pacific), and Rest of the World (RoW).

Among the four regional segments considered in this report, the Asia-Pacific market is projected to grow at the highest CAGR during the forecast period. This is primarily due to the growing incidence of cancer, diabetes, and other chronic diseases in APAC and the improving healthcare infrastructure in the region. Furthermore, the growing middle-class population and disposable income levels, increasing demand for advanced medical treatments, increased awareness about the safety and efficacy of pain management devices, growing medical tourism industry, increasing government support, and better accessibility to advanced healthcare facilities are driving market growth in the APAC region. India is expected to witness the highest growth in this regional segment, primarily due to favorable government policies, increasing penetration of health insurance in the Indian market, growth in the number of pain management clinics and centers, and high prevalence of lifestyle diseases, such as diabetes and cancer, in the country. In 2015, India and China had 65.1 million and 113.9 million adults suffering from diabetes, respectively. It has been estimated that by 2030, both countries cumulatively will have almost half a billion diabetic patients.

Driven by its high growth potential, several market players are increasingly focusing on entering into the Indian market by introducing new products and expanding their direct presence in the country. In September 2013, DJO Global announced plans to launch 10 pain management devices in India in a phased manner over the next five years. The company also planned to start its operations in India, starting with 40 distribution locations across the country. 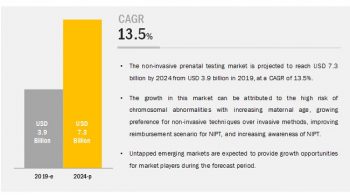