Skip to content Skip to blog sidebar
Home » Automotive &Transportation » What are the trends in the Fluid Transfer System Market? 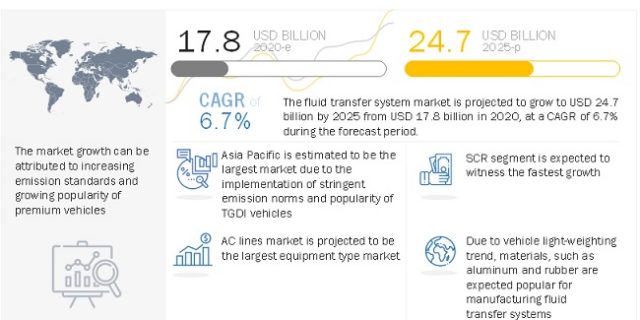 The Fluid Transfer System Market is projected to grow to USD 24.7 billion by 2025 from USD 17.8 billion in 2020, at a CAGR of 6.7% during the forecast period. The demand for fluid transfer system is primarly driven by stringent emission norms, coupled with increasing adoption of SCR, turbochargers and growing demand for premium vehicles.

The fluid transfer system industry is expected to be positively impacted by growing popularity of electric vehicles. The decreased emission limits and increased fuel efficiency requirements have increased the focus on electric & hybrid vehicles, which, in turn, is expected to have a significant impact on the global fluid transfer system market. For instance, PHEVs are premium vehicles equipped with the most high-end features available and are high on cost. PHEVs employ lines such as battery cooling lines, engine cooling lines, brake lines, air suspension lines etc. Thus, with growth of such electric vehicles, the fluid transfer system market may witness a landscape change in the coming years.

Due to the implementation of stringent emission norms, adoption of aftertreatment devices, such as SCR and DPF, has increased significantly. DPF lines have witnessed the  asignificant  growth in recent years; however, SCR lines are expected to grow at a fastest  rate in the coming years. This is due to the ban on diesel vehicles in various countries. Also, SCR technology offers benefits, including more enhanced NOx reduction than LNT by nearly 90%, and hence, it is mostly preferred in diesel vehicles across the globe. Thus, in the coming years, after-treatment lines manufacturers can tap these unexplored opportunities to increase their market share.

Asia Pacific is the largest fluid transfer syetm market in the coming years. Stringency in emission standards is the primary factors expected to drive fluid transfer system market. For instance, China implemented 6a & 6b, India implemented BS VI in 2020. Also, strong growing adoption of TGDI technology in major automotive market, such as China is expectd to strongly boost the market in the region. Considering the increasing vehicle production in countries such as China, India, Japan with advanced technologies is expectd to propel fluid transfer system market.


To speak to our analyst for a discussion on the above findings, click Speak to Analyst 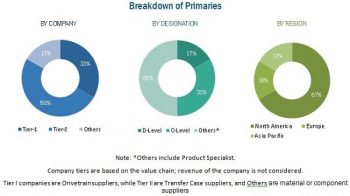 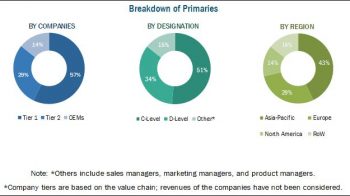 Tappet Market for Automotive Analysis, Trends, Growth and Forecast 2017 to 2025 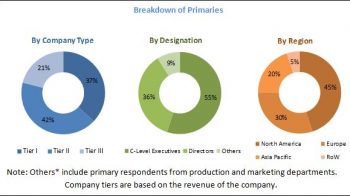