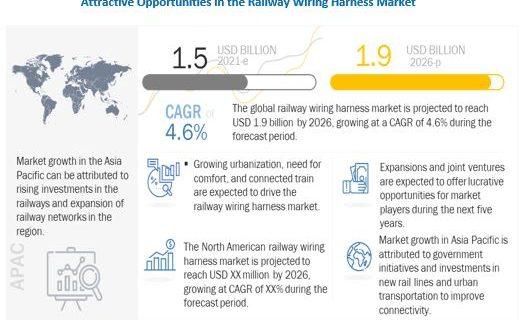 The global railway wiring harness market is estimated to be USD 1.5 billion in 2021 and is projected to reach USD 1.9 billion by 2026, at a CAGR of 4.6% during the forecast period.  The market is principally driven by the increasing rail projects, government investment in railways, increase in rail network length, adoption of metro and high-speed rail. For example, in December 2019, Deutsche Bank announced plans to invest USD 12.6 billion for new trains by 2026. In October 2020, Turkey announced the expansion of its railway network to 16,675 km by 2023 from 12,803 km in 2020. In February 2020, the European Investment Bank allocated USD 1,081.3 million for European rail projects for a variety of rail fleets. In 2019, Russia planned to invest USD 2.70 billion in the development of railway infrastructure to increase freight container volume by 2024. Asia Pacific region is estimated to hold the largest market share of 49.7%, by value, in 2021, followed by Europe with 30.3%, and North America with 8.7%.

The Asia Pacific region is the largest and the fastest-growing region due to the increasing infrastructural developments, increase in government spending on the transportation sector, and the ongoing/upcoming projects in various countries. China’s rapidly growing economy is driving the expansion of urban transit and high-speed train network, and the enhancement of transport systems in the country, thereby making it the fastest-growing railway industry in the world. More than 20,000 km high-speed rail network is operational in China while an additional 45,000 km is currently in the developmental phase.

The traction system is estimated to account for the largest market share, in terms of value. The growth of the segment is driven by the consistently increasing rail-based intercity and intracity transportation. Increasing adoption of rolling stock and rising investments by governments for infrastructure development are expected to propel the growth of the rapid transit market, which would further support the demand for wiring harness for traction systems. For instance, the Indian government has allocated a fund of USD 340.4 million for Regional Rapid Transit System (RRTS) projects in the Budget for 2020-21. Such investments in the expansion of rail infrastructure and the development of new projects are expected to boost market growth.

To reduce emissions, governments are planning to convert existing diesel fleets to electric locomotives. The Indian Government plans to convert its diesel locomotives with lifeless than five/six years to electric locomotives. This is expected to provide an additional life of five to ten years with the use of 12000 HP, 9000 HP locos, wherein earlier 4500HP locos were used. These developments are expected to offer opportunities for the growth of the market in the future. This is estimated to support the growth of railway wiring harness for traction system.

Power cable holds the largest market share in railway wiring harness market because of the growing adoption of electricity consuming systems in train which requires high voltage. According to the International Union of Railways (UIC), the global extension of the high-speed rail network could reach more than 80,000 km by 2035. This transition in the transportation sector is the cause of rapidly growing urbanization globally.  Several countries such as China, France, Germany, and Spain have developed high-speed train projects just after its introduction in the rail industry. The acceptance of high-speed trains is anticipated to rise in the near future due to the prospects of economic growth created by the development of high-speed rails. These factors foster the exponential growth of the power cable during the forecast period.

The railway wiring harness market is dominated by players such as Hitachi Ltd. (Japan), Prysmian Group (Italy), TE Connectivity (Switzerland), Leoni (Germany), Nexans (France) among others. These companies offer an extensive range of products and have strong distribution networks worldwide. The key strategies adopted by these companies to sustain their market positions are new product developments, collaborations, and contracts & agreements. The railway wiring harness market in different regions is dominated by regional OEMs.